More than 10 years have passed since I last reviewed a Ford Expedition, which tells you something about how little Ford’s biggest sport-utility truck changes.

Like the Chevrolet Suburban and Tahoe and GMC Yukon it competes with, the Expedition is a steady Eddie. It’s truck-based and remains much the same from model year to model year. Expedition and Expedition XL (14 inches longer, like Suburban compared with Tahoe/Yukon, are body-on-frame like many past sport-utes. But years ago Ford moved its other utes to car platforms and dropped the monster Excursion.

That leaves Expedition to tow the boats and trailers that outdoorsy folks need to haul. And this new version, which looks pretty similar to previous boxy models, will pull up to 9.200 lbs. That’s a gob lot.

Yet the 2015 model does have a freshened nose and tail to smooth its boxy looks a bit, and more important, Ford drops its 3.5-liter Ecoboost V6 under the hood in place of the former 5.4-liter V8. The goal with the turbo-assisted V6 is to improve gas mileage, which the EPA rates at 15 mpg city and 20 highway. That’s still pretty low, as a Tahoe/Yukon is rated 16 mpg city and 22 mpg highway with its 355-horse V8. I managed just 14.9 mpg in my Expedition test drive, which was about 60% city driving. I had gotten 18.7 mpg in a GMC Yukon last fall.

But you’re not buying an Expedition for fuel economy, you’re buying it to tow and haul goods and people. Unlike anything other than its GM competitors and a couple Japanese competitors, this is one of the few vehicles that will comfortably carry eight people. In the tested King Ranch edition, which is the standard 206 inches in length, there’s a small cargo area behind the third row seats. If you move up to the XL that space grows substantially. Naturally up top there are roof rails in case you need to strap on some extra gear.

Comfort inside is excellent thanks to fairly flat leather seats that allow passengers to slide into the seats easily. The King Ranch model, which was Bronze Fire Metallic outside, what I’d call metallic brown/copper, ladles on the leather inside. Seats are a moderately dark brown with reddish brown piping and stitching, which also carries over to door armrests. There’s a wavy W-look logo (King Ranch’s branding sign) atop the padded center armrest/storage box and brown logo embedded in the front seatbacks.

For the uninitiated, King Ranch was founded in 1853 in Texas by Capt. Richard King. The ranch is now 825,000 acres, which is bigger than Rhode Island. Seems appropriate that a truck this big would be associated with such a large spread!

Yet as rough and tumble as a ranch would seem, the truck coddles its occupants. In addition to all that leather the front seats are heated and cooled and the second row also is heated. The third row is fairly roomy and folds flat into the floor automatically via power buttons in the cargo area. Likewise, the hatch is powered, but oddly the button to lower it is located inside the cargo bay, so best to press it and step back in a hurry. Many utes put that power button on the tailgate base for easier access.

No heated steering wheel here either, but the seats are powered and feature two memory buttons for the driver’s seat and a power lumbar adjustment. The steering wheel is power tilt/telescope and on the steering column is a button to adjust the power pedals.

The black over brown dash is well laid out too with everything easy to see and understand. Expedition has large radio volume and tuning knobs along with climate control knobs. Radio buttons and climate buttons are arranged in pads, sort of like phone keyboards and simple to use.

I like the matte silver vertical trim on the dash and around the center stack, but the dark fake wood trim there and on the armrests and console looks very 1970-ish. Odd considering the luxury appearance of the remainder of this truck, which is based on the F150 pickup platform.

Other pluses in the cockpit include dual cupholders up front and along the back edge of the center armrest for rear seat folks, dual sun visors for driver and passenger, and three open storage bins atop the dash and another in front of the shift lever in the console.

One of the coolest features is a power deploying running board ($995) that folds neatly into the rocker panel on each side of the truck when the doors are closed. That creates better aerodynamics. The running boards then power down as soon as any door is opened. As tall as this is, with 8 inches of ground clearance, you’ll need the running boards to mount this bronco. Not sure if snow and ice might impact the running boards’ deployment in winter, but if your garage is heated that may not be a problem.

All of which brings us to performance. With a 119-inch wheelbase and independent rear suspension the Expedition delivers an excellent, smooth, controlled ride. Interior noise is minimal too.

Power is excellent from the 356-horse turbo V6, hence its ability to tow such heavy loads. For the record the V6 increases both torque and horsepower by 55 compared with the former V8. A turbo gives the truck more immediate power and while not fast, the Expedition feels lively for a vehicle weighing more than 5,800 lbs. 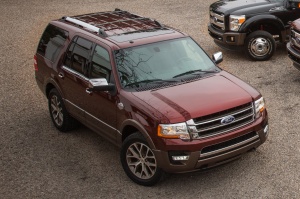 Expedition’s six-speed automatic shifts smoothly, but handling leaves a bit to be desired. While steering effort is low, the steering still feels vague with a bit of play in the wheel. GM’s trucks have the edge here.

But four-wheel disc brakes, traction control, hill descent control and a 4-wheel-drive system controlled by a knob on the dash all work well. The 4-wheeling system allows you do go to 2-wheel rear-drive for efficiency, or three 4-wheel modes, from automatic to low for mudding.

The only other option here was polished aluminum wheels. Those are 22-inchers that give the truck an even more authoritative look as it rides on 22-inch tires. R20 tires are standard. The fancy wheel and tire upgrade runs $2,180.

But price may be one of your least concerns if you’re of the mindset to go with the 4WD King Ranch edition. It lists at $59,510 and with options and $1,195 delivery this pushed to $64,280. That’s certainly in the ballpark of its competitors.

The XL model runs about $3,000 more, but a base XLT lists at $45,780 with delivery and rear-wheel drive. The 4-wheel-drive model is about $3,000 more and there IS a Platinum edition, which slots in above the King Ranch with special wheels and more chrome highlights. It lists at $63,605 in 4WD mode.

For those with needs, mainly heavy hauling or a large family to transport, Expedition is an extremely comfortable vehicle with loads of room and power.

Made in: Louisville, Ky.