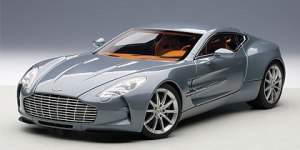 Fortunately not many cars cost nearly $2 million, but then the rarity of such cars makes them all the more curious and collectable.

That’s especially true with smooth, slinky, sexy hot rods like Aston Martin’s limited production One-77. Only 77 were made from 2011 through 2012. Now Autoart unveils its version in 1:18 scale as part of its Signature Series, and what a beauty it is.

Talk about a “halo” car, the One-77 is an extremely limited production super car of sorts created by England’s Aston Martin. It was an exercise in art and automotive technology first teased at the Paris Auto Show of 2008 and fully revealed at the Geneva show the next year.

Its highlights include a carbon fiber monocoque chassis with hand-made aluminum body to help it click the scales at just 3,594 lbs. That’s unusual, but Aston Martin, which won the 24 Hours of LeMans back in 1959 with Carroll Shelby and Roy Salvadori at the wheel, has always been a purveyor of power. So the One-77 drops a gutsy 7.3-liter, 750-horse naturally aspirated V12 under its long clean swept-back hood.

That’s one of the most powerful naturally aspirated engines ever and reportedly will push the One-77 to 220 mph and 0-60 mph in about 3.5 seconds. Quick indeed, but some super cars have bettered that mark already.

For the record the car also has 20-inch Pirelli P Zero tires and carbon ceramic Matrix brakes, but that won’t matter much on a diecast model! 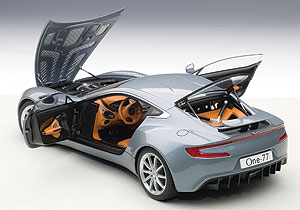 Autoart creates another stellar diecast car body with the One-77, the review car bathed in what is called Villa D’Este Blue, and there is a slight blue cast to it. But in some indoor lighting you’d swear it is metallic silver. As you’d expect, the paint job is flawless.

The shape and detail are all correct as to the original car, plus the hood, rear window and doors open along with a small pop-up spoiler on the rear deck. That’s released by a button under the car, whose bottom is flat and reflects the carbon fiber chassis of the 1-to-1 car. So you won’t need to display this in a case with mirrored bottom.

The beautiful fishhook-shaped thin red rear light bar looks elegant and realistic while the multi-layered, beveled headlights are exquisitely shaped and formed too. The long, lean doors have a thin chrome trim around the windows and the large door mirrors have reflective surfaces. Door handles are flush with the door, so just indentations, no actual door handle to pull.

Aston’s grille, now seen commonly on Ford Fusions, is beautifully detailed and there’s a thin carbon fiber-look chin spoiler along with four vented metal inserts in the hood and front fenders to cool that massive V12. Scallops in the front quarter panels and door make the One-77 look fast even in a stationary display and there’s chrome on the sculpted streak that extends fore and aft of the side scallop. 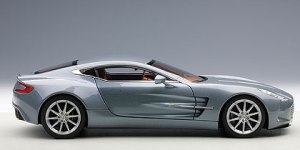 The engine compartment is detailed, but as with most modern cars, you don’t get to see as much as you would in a 1960s muscle car. The engine is fairly bland, but what’s cool here is the area in front of the engine where you can see the highly detailed suspension. In back you get a glimpse of the giant springs for the rear suspension inside the rear window in two cutouts under the glass. Likewise there are big support bars extending from the midpoint under the glass out to the edge of the window. These are designed to stiffen the body for more precise handling.

While the exterior is sleek, I really like this interior, a saddle brown with long thin black console and center stack with what looks like a bazillion buttons. The main gauges are visible in front of the driver’s seat and a well-padded steering wheel with paddle shifters. Seats are highly sculpted both in shape and cushion design for a racy look and black shoulder belts extend through the hoops next to the headrests.

Overall the Aston is made up of 275 metal and plastic parts with 108 being metal and 15 photo-etched. Each car gets 70 free-hand sprays, which contributes much to the deep finish each Autoart model seems to offer.

The One-77 is an eye-catcher sure to stand out in any collection, even among the likes of Ferraris and Lamborghinis.