Fun, Fun, Fun till daddy takes the BRZ away!

Rarely have I driven a sports coupe that was more pure fun to drive and garnered more attention than the Subaru BRZ, and yet …

The BRZ, a kissin’ cousin to Scion’s F-RS, is far from perfect. But it’s so much fun you might overlook most of its shortcomings.

First, there are many bright spots. It’s an edgy looking sports car, one that gets thumbs up at stoplights from young men, young women and guys on motorcycles. It has a triangular center mounted brake light below bumper level in back and the tested Limited model touts a mean Star Wars look rear wing that even Darth Vader would give a thumbs up.

The test car was a dark metallic gray that complimented that edgy, somewhat menacing look, and being rear-wheel drive and packing a 200-horse Boxer 4-cylinder, the car has excellent balance and a peppy feel. BRZ accelerates quickly from a stop, but doesn’t have explosive power as it would if the car’s horizontally opposed Subaru-designed engine had a turbocharger. Could there be one in the future? One can hope. 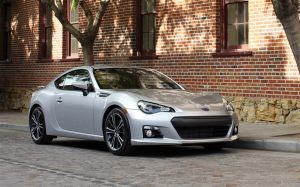 Subaru also gives the car an easy shifting 6-speed manual that slips through the gears smoothly and synchs well with the engine to give it that pep. The clutch works well too, so unlikely you’ll tire in thick traffic or kill the engine at a stoplight.

Handling is light and easy too with good steering feedback and the car feels well balanced so it zips through tight corners like the sports car that it is and with the car’s rear wheels feeling well planted. The low profile provided by the Boxer engine keeps the center of gravity low, which also helps handling. A Torsen limited-slip differential and stability control give BRZ sticky footing upon acceleration and in corners and much of the car’s light feel is attributable to its modest weight, just 2,776 lbs.

But the Limited’s sport-tuned suspension is where you may have some issues on Midwestern roads filled with patches, potholes and pavement seams. The BRZ’s ride is stiff and on anything less than near perfect roads you’ll feel that delivered to the seat of your pants pretty readily. Adding to the test car’s firm ride were its R17 summer performance tires. Of course they also aid the grip you get when pushing the rear-drive BRZ through turns. Another cause of the stiff ride is a modest 101.2-inch wheelbase. Much shorter than 105 inches and ride usually suffers.

Yet stopping is crisp with four wheel anti-lock disc brakes along with brake assist and electronic brake force distribution.

If you like the Subaru’s sporty outward appearance you’ll also likely be happy with its sporty interior. The test car, the more well equipped Limited model, featured black leather trimmed seats with Alcantara (fake suede) seat inserts. The seats are well shaped with good lateral support in both the seat back and bottom. I drove the car to Indianapolis and back and was comfortable both ways. A manual seat height adjustment is a welcome aid to finding a good driving position.

Enhancing BRZ’s sporty look is red stitching on the seats, leather-wrapped steering wheel and door trim. Plastic trim is a matte silver on the steering wheel hub, shifter, air vents, dash and door handle. These are manual seats, which helps keep the price down, along with the car’s weight. But they’re also easy to adjust and position so the driver can easily see the dash gauges and controls. The Limited also adds heated seats up front.

Oh, by the way, there is a tiny bench seat in back to satisfy insurance companies that this is a 4-seater, but logic tells you that this is primarily a 2-seater. If anyone in the front seat is beyond 5-8 or so there’s virtually no legroom in the rear seat.

Trunk space is reasonable and obviously you could put a couple bags in the rear “seat.” I had one suitcase and a few smaller items in the trunk and easily could have managed a second modest sized suitcase.

Main dash layout is good with the tach and speedometer easy to see and right in front of the driver. There’s push button start down on the center stack, behind the console-mounted shifter. As you’d expect, there are power mirror and window buttons on the driver’s side door and I like the big dual climate control knobs on the center stack too. The Subaru’s steering wheel is a manual tilt/telescope number.

I should note that a navigation system is standard too, something you usually pay extra for in lower-line models, meaning those below $28 grand or so. While it’s nice to have the built-in nav system, the downside is that the radio uses the same modestly sized screen with itsy-bitsy touchscreen channel buttons and equally small buttons for adjusting sound quality. I futzed with it all the way to Indy and back. Never got it right.

Another concern is a good bit of road noise and roar from the tires, which meant I was constantly bumping up the radio’s volume just to hear what I was trying to tune in. I suggest putting most of the power to the front speakers if you intend to listen to words being spoken on the radio. That’s less of an issue if you’re simply cranking tunes and already know the songs’ words.

One other negative could be a concern if you park in grocery store lots much. There’s a big blind spot over the driver’s shoulder. It didn’t bother me while driving, but backing out of parking spots was a bit dodgy.

From an appearance standpoint inside, the BRZ also nails the sports car look with a metal-faced trio of pedals and a metal door sill.
I also was impressed by BRZ’s gas mileage. It was excellent. I got 33.6 mpg in about 85% highway driving, while the EPA estimates are a more modest 22 mpg city and 30 mpg highway. To get the full 200 horses out of the engine the car also prefers mid-grade to premium gas. But as with all such recommendations, it will run on regular unleaded if need be, but you’ll lose a bit of power.

Pricing is moderate for this and Toyota’s Scion model, which was jointly developed with Subaru, but using a Toyota platform so is rear-drive, not all-wheel-drive as are all other Subarus.

The Premium level BRZ starts at $26,390 and the tested Limited at $27,595 with a $795 delivery fee to push the test car to $28,390. There were no options. But the Limited adds the dual climate control system, the leather trimmed heated seats, fog lights, the cool rear spoiler and keyless entry. While I’m generally a cheapskate, I’d go for the Limited for the spoiler alone. THAT’s what really makes the BRZ look so awesome!

Misses: Ride is stiff, there’s a big blind spot over the driver’s shoulder and road noise is high. Don’t like tiny radio channel buttons on touchscreen and adjusting radio sound quality is difficult, again due to tiny controls.