I saw this ’64 Chevy Impala promo model and it brought back so many memories I just had to blog about it. My grandpa was a big Chevy guy and I think it was every Sunday night, we would go over to his house to watch the Dina Shore Show. She sang the song beginning in 1952,and it became something of a signature song for her. Later the song was also sung by male spokesman Pat Boone on his Pat Boone-Chevy Showroom (ABC) from 1957 through 1960.  This was not just a 30 second jingle, it was an actual song.

OK, enough singing, back to the car. Introduced for the 1958 model year, its name came from the southern African antelope. Maybe somebody has made a visit to Africa and thought the name was cool. It was Chevy’s most expensive passenger model through 1965 had become the best-selling automobile in the United States, competing against the Ford Galaxie 500 and the Plymouth Fury when full-size models dominated the market. 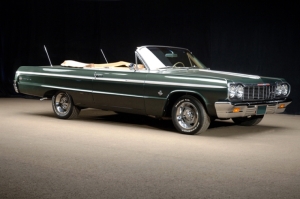 This ’64 was one of the third generation (’61-’64) cars. The new body styling was more trim and boxy than the 1958–60 models. Sport Coupe models featured a “bubbleback” roof line style for ’61, and a unique model, the 2-door pillared sedan, was available for 1961 only. It was rarely ordered and a scarce collectible today. The rare Super Sport (SS) option debuted for 1961. These cars, remember it’s the 60’s had huge V8’s in them such as the 409 and the Beach Boys produced a hit single about that engine. I have it on my iPhone. The Beach Boys produced a hit single, “409,” referring to the Chevy, which became an iconic song for these cars. What set the Impala apart from others in the Chevy lineup? They featured premium interior appointments, plusher seats, and more chrome trim outside, including a full-width aluminum-and-chrome panel to house the now famous triple-unit taillight assembly. SS models featured that panel in a special engine-turned aluminum, which was also used to fill the side moldings, making the SS more distinctive in appearance.

So I went poking around and prices ranged from around $2,000, basket case, to truly great examples like this’ 64 clone, on the left, which meant the SS package was added as part of a frame up restoration and was going for $22,000 on eBay. I also found this example above going for $55,000. I love the red with a white interior but am not sure about the tramp stamp on the back. The older year SSes I found were going for almost double that price. Sweet rides though. 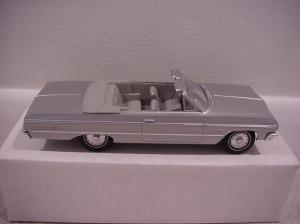 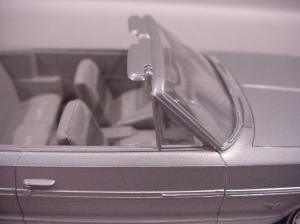 While the promo models don’t fetch anywhere near that kind of cash, good examples like this one do. This would be considered a 10 on a 10 scale. Chrome is great, the window posts and steering wheel have no cracks, plus it comes with the box. Wish I had the $480 that this one went for. But there are always the memories.