A Caddy with an option you would never find

I love Caddy’s and who doesn’t? They were famous for lots of chrome and the fins. The new ones are even cooler with all the performance built-in. I also love hot tubs. Wait, where is he going on this you’re thinking. Check out the video where two of my faves are combined. What fun!

Let’s face it, most of us don’t have a pile of money

So collecting cars, like this Ferrari GTO, which is now the most expensive car ever after being auctioned off for $38 million this summer, is pretty much not going to happen. Boy if I had that kind of cash and bought it the car would spend much of its life in my garage with me oogling all over it. Even with insurance which has to be at least the size of or mortgage payments I’d be afraid something would happen. I mean you wouldn’t drive it to the grocery store to get a gallon of milk.

But there is hope because I found this article in my Yahoo Auto feed from Haggerty with some cool cars for under $15,000. My fav is the 1963-65 Buick Riviera. Go check it out. You decide.

Bet I could count on one hand the amount of guys who never played with model cars growing up. We had them because there was a connection. Our parents, relative, or the guy down the street had one. Yup, he was the cool guy. We smashed them, burned them, and blew them up. Boy did I get busted for that one. Of course we did have special ones that never went out of our bed rooms like your first one. Remember it? I remember mine and it wasn’t a Rambler. I was probably about five or six. Dad and I had an HO train layout so we made several trips to the local hobby shop growing up in Madison, WI. to get more stuff. There it was, the shiny bright object before I even knew about shiny bright objects! It was a promo model

car and dad knew I wanted it but I would have to do one thing first. OK, I’m giving a deep dark secret here. Like Linus, from Peanuts, I had this blanket that, well I sucked on. Hey I was a kid. So I gave it up. Yup, I wanted it that bad. Now you’re wondering what was the car? You would never guess in a million years! Wait for it…..an early 60’s Volkswagen Beetle, and it was pink. An early view of my softer side:) As I picked up on how this whole deal worked, I was giving up all kinds of promo models for doing stuff my parents wanted me to do and I made them think it was their idea. 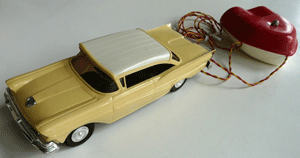 that let me run it around with a remote control. This 1958 Ford Hardtop made by AMT was exactly like it. Took two D batteries and you could run it forward and backwards and turn it left and right. Hey this was the technology of the day. One of my relatives must have given it to me as a gift at one time, this one went for 140 bucks recently on eBay while this red 57′ sold for 99 bucks. But I also had one even cooler than that, a 1958 Skyliner that retracted the top just like the real one back into the decklid. Couldn’t find one but it was exactly the color of the real deal here only nowhere near as complicated.

The Skyliner was the only true hardtop convertible in the world when it was introduced in 1957. The top came down with a touch of a button but that was the simple part. To get the top into the deckle took three roof drive motors driving four lift jacks, four door-lock motors, ten solenoids, and four locking mechanisms for the roof. 610 feet of wiring made sure all that stuff was talking to each other. A good example is hard to find and when one is it will take about $75,000 to take it home. Too rich for me. I’m going to keep looking for the model I once had. Give me a shout if you find one.

Did I ever tell you that I’m a huge Star Trek fan? Yuppers since the original series was on in the 60’s all the way to the end with the last of the franchise TV show, Enterprise. I have built most of the Enterprises along with some other star ships. In fact, what caught my eye about this spot is the screen grab on the left from the kid’s bedroom. Pretty close to what I had.

Me and William Shatner are tight. A couple of years ago a flying buddy of mine made a flying replica of the Enterprise A and I made a video, uploaded it to my YouTube site and that’s when the fun began. Views started climbing faster and faster. I started digging down into the comments and it turns out “The Shat”, Bill wants all his close friends to call him that, tweeted about the video and I tweeted back. Yup, we’re tight:) Go check it out but hurry right back.

Ok, back on topic here. VW is using the duo to introduce its e-Golf electric vehicle and its XL1, the mini-spaceship coupe that’s only sold in Europe due to its $140,000 price tag. Ouch! You know how I feel about electrics. Fun spots though. Read more about them and less about me here.

Will utilize the Jeep Renegade platform

At the Paris Auto Show today Fiat introduced its entry into the super hot mini-suv category, the 500X. Fiat is hoping the suv will give its sales a bump start. Not sure if you see this too but the rear looks Mini-ish. Read on.

Have camera, will travel

You mean barn finds, right? Nope, not this time. The cars for this entry I saw at a couple of local bars. I’m not a bar fly but love to have a couple of beers. I love beer about the same as I love classic cars.

Introduced in the fall of 1969 for the 1970 model year the Challenger was Dodge’s answer to the Mustang and Camaro but was tardy to the party. The Challenger was conceived in the late 1960s as Dodge’s equivalent of the Plymouth Barracuda. A bit of trivia here, the Barracuda was actually the first car in this sporty car segment by a few months ahead of the Mustang but we all know how history played out. So out with the family one night for dinner and it was actually my daughter who spotted this car first. She loves cars too. Good girl.

END_OF_DOCUMENT_TOKEN_TO_BE_REPLACED

What’s not to like about them?  Spies, lovely ladies, gadgets, and hot cars. I love seeing what car will be featured in the newest movie, how it’s modified for spy use and the chase scenes. You see them the cars come for auction every once in a while and usually go for big bucks. Now the world’s largest collection of Bond vehicles are up for sale. Boy if you thought the single cars at auction were out of your range, this one is past the moon. A cool $33 million and it’s yours. Boy would I like to be friends with the person who buys the collection. Click here to see what could be yours.

Win a chance to ride in the Oscar Mayer Wienermobile for a day!

The first version was created in 1936 by Oscar Mayer’s nephew, Carl G. Mayer, and variants are still used by the Oscar Mayer company today. I’ve always thought it would be cool to ride in one. Even better for a whole day. Boy would I show this off. Oscar Mayer has created a way for that to happen. Read on.

The U.S. isn’t the only country which likes making promo models

Say what? So I’m perusing the model car auction sites, as I almost always do to see what’s up for auction and what cars in my collection are worth, when I come across a couple of Volvo’s, yup Volvo’s. Not from one of the plastic model makers here but actually made in Finland. By the way did you know that besides saunas the country is also famous for inventing ice skates, and virtual air-guitar. Bet you didn’t. But it’s most famous claim to fame is that it is the homeland of Santa Claus. That has to be pretty busy right now.

A perennial money-loser in a country with strong labor unions

The company started in Sweden which by the way claims on its web site “Discover a country where the moose is king, Pippi Longstocking is a hero and innovation rules”. OK, I guess that works for them. The car company was then sold in the early 30’s to, SKF, a huge company that makes tons of other stuff. Famous for safety innovations it was then sold to Ford Motor Company for $6.45 billion in 2000. Everything was hunky-dori until Ford decided that it wasn’t such a great idea to own the company and sold the Volvo Car Corporation in 2010 to Geely Automobile of China for $1.8 billion. The saga continues. I mean they make some really cool cars. Forbes magazine judged the 2013 Volvo S60 R-Design one of its top picks for “Fast Cars under $50,000”. It will go 0-60 in just over five seconds. That’s pretty quick.

Own a part of Volvo history 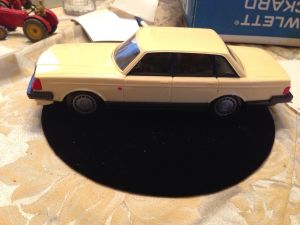 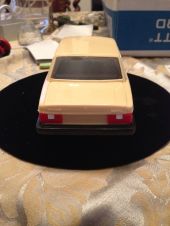 The cream-colored one looks like a 240 GL, Volvo’s best-selling car from 1975 until 1982. The promo model has some nice details to it like the wheels and recently sold for around 30 bucks. The red one, maybe a two-door version went for much more, around $140. Note the stamping on the bottom. I had to contact the 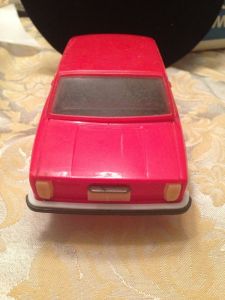 seller eBay seller, edgedeepgreensea, to see how they got a hold of these cars who replied, “Yes interesting estate purchase the collector was in foreign services and lived in Italy for I think 9 years. He purchased lots of cars from all over the world. The collection was massive and I was only a buyer of a fraction of what he had. He seemed to love all cars”. He finished (no pun intended) by telling me that he has more cars on the way, this time from Russia. Can’t wait to see those.

Let’s end this blog entry with a language lesson

Anybody out there up on their Finnish? I liked this saying, “Älä osta sikaa säkissä.” Translated directly it reads “Don’t buy a pig in a bag.” OK, I guess, I get it, a saying, “Always make sure you know what exactly you are buying”. In this case it would be a promo model not built in America.

Every may Mark and I head up to Road America (our favorite place) to the Midwest Automotive Writer Association event. There are cars from just about every manufacturer with the cars they want us to write about. Sure there are “family” cars but sprinkled in are lots of fun cars. In this case it was the 2014 Hot Wheels edition Camaro. This is the dream of millions of Hot Wheels® fans and the first time a full-size, production Hot Wheels® car has been offered for sale by any manufacturer. What a hoot! Check out the video by clicking on the image.