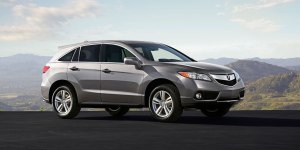 Flying into Washington D.C.’s Dulles Airport for a family wedding, I was frazzled from a day of flight delays, noise and airport confusion. But there in the parking lot was my soul soother, my nerve mender, a new 2013 Acura RDX.

This RDX is more spacious, more luxurious feeling and a better all-round performer than its predecessor, which was no slouch to be sure. The interior is roomy, comfortable and quiet. Its power hatch welcoming to a big load of luggage. Everything looks and feels right for a small to mid-size crossover. It didn’t hurt that mine was the upscale AWD Tech model, which means it was slathered with goodies and gadgets.

But at its base is solid performance that any luxury crossover owner would want.

Its new 3.5-liter i-VTEC V6 delivers a healthy 273 horses, up from 240 hp with the previous turbocharged 4-cylinder. But the turbo delivered it with more low-end oomph. This is silky smooth after harnessed to Acura’s 6-speed automatic that features Sport/Shift, including paddle shifters behind the steering wheel. I doubt most drivers will use that feature often, but it’s a perk if you prefer more performance.

Certainly I had no trouble keeping up with the loonies on D.C.’s frantic Beltway, but despite weighing just 3,838 lbs., the RDX feels heavy, some might call it substantial. That adds to its luxury feel, but steering effort is a tad heavier than some folks might expect in this size crossover. 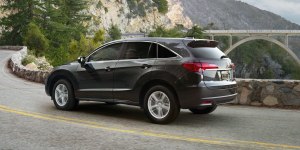 Still, the RDX handles well with fairly quick steering for a crossover. It’s easy to control on the highway and on winding back roads, many of which are pretty narrow in Virginia and Maryland, and made narrower by overhanging trees and shrubs. There is slight body lean in tight turns, but nothing unusual for this type vehicle.

Ride was stellar. I had up to five adults in the RDX much of the weekend and most commented on its comfortable, quiet interior. Ride, which is well controlled with a multi-link suspension in back and MacPhearson struts up front and a 105.7-inch wheelbase, tends more toward luxury than sport. That was perfect for my passengers.

Also standard on this model is all-wheel-drive and four-wheel discs brakes with ABS, traction control and stability control make it a good vehicle for sloppy weather, but there was none during the test drive.

If there was a disappointment in the driving aspect it was simply the gas mileage. I got just 17.6 mpg while the EPA says to expect 19 mpg city and 27 highway, up from the previous turbo’s 24 mpg highway. Premium fuel is preferred, but not required. My test was close to 80% city, much of it stop-and-go, and I did have either luggage or 5 people aboard 90% of the time.

Inside, the dark gray metallic RDX was nearly recording studio quiet. The 2013 model features a better looking and easier to understand dash, and a load more soft touch surfaces, from the dash to the doors. Leather padding inserts in the doors felt and looked great and the brown over tan interior leaned heavily toward sitting room comfort.

RDX’s seats are broad and just mildly contoured with the tan leather being extremely soft and smooth to the touch. These seats will coddle you, and what’s wrong with that?

Head and legroom front and rear are generous, so five adults rode in comfort. The second row seats will fold down to create a nearly flat spacious cargo area, but we had 3 large suitcases and 5 smaller bags, duffels and totes in back with no seats folded.

I like Acura’s new dash layout too, with the two main gauges directly in front of the driver and behind the power tilt/telescope leather-wrapped steering wheel. Gauges are black with white numbers, so nothing fancy, but easy to read.

RDX also has push-button (red) start, two-memory settings for the power driver’s seat, two-speed heated front seats, a big glove box and storage bin between the seats, and overhead there are visors that slide, HomeLink, plus a sunroof with shade. Oddly the front seats are not cooled, which many luxury cars and utes now include, along with heat.

A big navigation screen, about five inches, is easy to see atop the center stack, and actually was easy to adjust via a large soft-touch knob mid-dash. There are six radio channel buttons, dual climate controls and eight large climate control buttons to direct the air where you want it and at what velocity, if automatic isn’t handling it for you.

On the steering wheel’s hub are radio, cruise control, phone and trip computer buttons, again all easy to see and figure out within a day of first sitting in the RDX. You no longer need an advanced engineering degree to work these controls. If only other luxury makes could figure that out. Oh, and there’s voice-recognition for the navigation system, part of the giant tech package built into this model’s costs.

Other tech features include a multi-view rear camera, a 360-watt stereo with 10 speakers and the AcuraLink communications system with Real Time Traffic info, which is invaluable in larger cities. Of course Nav is part of the deal as is the power hatch, fog lights, HD lights and auto climate control.

Overall, RDX is one of the nicest crossovers I’ve driven in a while, with excellent ride and interior comfort that puts it above many small to mid-size utes. If you don’t need all the high-tech gadgets, you can have a lot of luxury for $35,000 and change.

Made in: East Liberty, Ohio

Misses: Costly and feels heavy, even though it’s not overly so. Bit too much weight to steering effort and low gas mileage. Seats are not cooled.