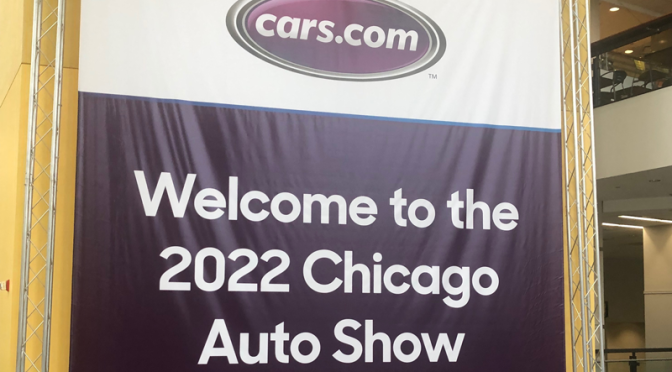 Dealing with Covid the best they could

It has to be tough putting together an event and dealing with all the Covid restrictions but the organizers of the Chicago Auto Show, running today through the 21st, pulled it off. They went to the city and state with a plan and it was given the green light. It’s not going to be like past years. First, all entrants will have to show valid proof of being vaccinated before entering, and second, the show is only about half the size.

Normally filling both halls of McCormick Place, it only fills one. Noticeably absent are manufacturers like Mazda and Mercedes-Benz. But what the show is lacking in displays, it more than makes up for with experiences as there are five different test tracks. More on that in a moment.

The big reveal of the show came from Ford who now only showed off its Bronco Raptor but also its Everglades edition. The Raptor is Ford’s answer to the Jeep Wrangler Unlimited 392, essentially a Bronco on steroids ready to tackle any kind of terrain.

The Everglades is more meant for those who don’t mind getting wet. Designed with offroading and mudding in mind, the new model builds atop the Black Diamond trim and the Sasquatch off-road package. It comes with a factory-installed Warn Zeon 10-S winch rated at 10,000 pounds. I don’t recall seeing that on a production truck.

A snorkel keeps the engine breathing clean air. The only bummer is that it is only available with the base 2.3-liter EcoBoost four-cylinder engine and a 10-speed automatic. Ford plans to open orders in March, with priority going to existing Bronco reservation holders who don’t have a build date.

Of course, they had an electric. Seems to be the fad right now. They showed off their F-150 Lightning which delivers a targeted 563 horsepower, up to 300 miles of EPA-estimated range, and hands-free driving. MSRP is under $40,000 before incentives to that should help sales. Ford claims it can power your house for up to three days. I file that under “good to know” but not a reason to buy.

But the coolest display they had was a pair of Ford GT’s introducing the 2022 Ford GT Alan Mann Heritage Edition. Right next to it is the 1966 Fort GT 40 that Alan Mann and his team raced at LeMans. No pricing was announced on the new GT although it will probably be around $800,000 like the other special editions, Ford, as rolled out. I have never been this close to one of the older GT’s.

From the “Why would they even think of doing that?” area, Ford took a classic F-100 and ripped the engine out of it replacing with an electric motor. The Eluminator EV Concept electric pickup is now powered using a 2021 Mustang Mach-E battery-electric powertrain. This is an e-crate motor Ford Performance is providing to guys crazy enough to want to do something like this.

Not to be outdone by Ford, Chevy was also on hand to show off its new Silverado EV coming this spring. This isn’t their current Silverado converted to EV power. It was developed from the ground up as a fully-electric truck on GM’s advanced Ultium EV Platform. Rated at up to 664 horsepower with more than 780 lb-ft of torque it certainly will be able to haul a lot of stuff. It can haul up to 10,000 pounds and has a 400-mile range. MSRP before any tax break is a reasonable $40,000.

Also on display is the new Z06 Corvette. It is powered by the all-new 5.5L LT6, the highest horsepower, naturally-aspirated V-8 to hit the market in any production car, ever creating 670 hp. Go and check out the reveal video Chevy did. Most important, listen to its sound. If that doesn’t give you chills running up and down your spine, well I don’t know what will. This is a car I lust after and so did buyers at Barret-Jackson in January where the rights to the first one off the production line went for 3.8M!

OK, back to the test tracks. There are five of them, Camp Jeep, Ford Built Wild, Ford Built to Electrify, Ram Truck Territory, and Toyota Proving Grounds. During our media preview day on the 11th, I did the Ford Built Wild so I could see what the new Bronco is all about.

And Then Camp Jeep which has been at the Chicago Auto Show for 18 years now. I went for a ride in the new Wrangler Unlimited 4xe.

Note: In the past, the lines for these are fairly long so plan on hitting them earlier in the day. The show runs through the 21st. Go, have some fun.