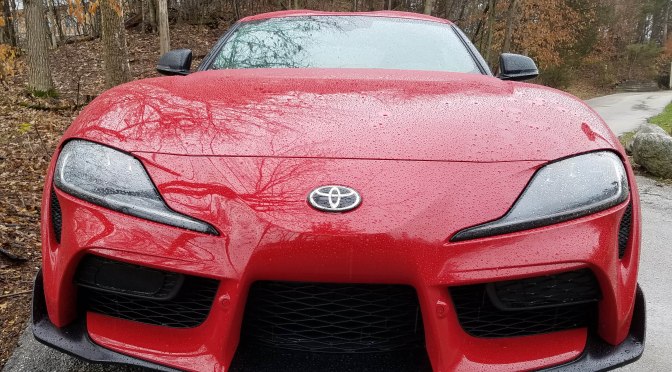 Seems collectively we’ve forgotten that it’s fun to drive a car, a sports car in particular. Instead the driving nation thrives on the high-riding muscle of big pickups and SUVs that 25 years ago might have been considered farm implements, or candidates for a Monster Truck rally.

But growing up in Indianapolis, where traditionally there’s a big race in May, I got hooked early on fast, nimble cars. Toyota, while making plenty of off-road haulers, used to also offer up finesse and styling. Think all the way back to its original sports car, the 2000GT, a swanky needle nose fastback introduced in 1967.

That was followed, eventually, by the Supra, a derivative of its Celica sports car, but with way more muscle. Now, after an 18-model-year hiatus, Toyota brings back the fun, nimbleness and sexy styling of Supra. 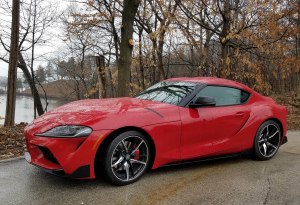 I got to test a bright red (Renaissance Red) 2020 GR Supra Premium a couple weeks ago, and I still can’t stop grinning.

I’ll admit, I got a sneak preview drive of the Supra on a private race course in Illinois last fall and knew it was a winner. If you follow cars much, you’re likely aware that Toyota worked hand-in-hand with BMW to create the platform for this near racer and grand touring car. The engine is BMW’s horsey 3.0-liter twin-turbo I6, but the two car companies took different paths to a similar, but not identical, result.

RELATED Video: Hop in and take a ride with Mark in the 2020 Supra

Toyota tuned its own suspension and steering system and from a styling standpoint went with sexy curves and a sporty yet more approachable sports car feel in its Supra. BMW went hardcore performance sports car with its new Z4. I’ve only had a teaser ride in the Z4, but for now the Supra interpretation gets my vote.

This I6 engine is both powerful and smooth with enough torque to snap your head back if you tromp the gas pedal like you mean it. There are 335 horses and 365 lb.-ft. of torque and Toyota says 0 to 60 comes in just 4.1 seconds and top speed is 155 mph.

But that’s managed beautifully by Toyota’s 8-speed automatic transmission that includes paddle shifters behind the steering wheel for folks who’d prefer to make their own shifts. No manual tranny is offered.

Toyota knows its market and few buyers will be true racers. Most want head-turning looks and the power and engine crackle on downshifts that can make even the most macho dude giggle! Most also will likely be pounding that accelerator as they head onto the freeway, or around places like Holy Hill where the roads meander, featuring tight curves.

That’s where the Supra stands out. Between its power and responsive sports car handling it’s a gigglefest on wheels once you hit the twisties. I spent several hours on such roads, including “Rustic Roads” that also feature a fair amount of road decay. The fun was in dodging the potholes. 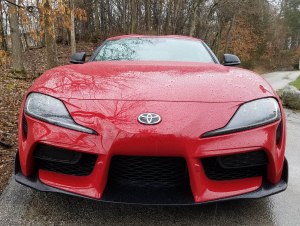 Less fun was hitting them. That’s when you realize that a car with a 97.2-inch wheelbase (think original Mazda Miata) is not going to deliver a smooth ride, no matter its price tag. No, ride is jiggly in the Supra, but if you live in California, Texas or Florida, someplace where winters aren’t so tough, you’ll likely enjoy the ride just fine. In the Midwest, well, you need to work that steering wheel to avoid the big craters.

That’s part of the fun, naturally, but still, a little more cushion would be nice. Also, for us 60+ guys and gals, extricating ourselves from the low-riding Supra takes a minute or two, and never looks elegant.

Yet the machismo of driving such a sensuous beast overcomes most of that. Plus with the automatic and all the safety goodies on Supra, you feel well protected from yourself, and the giant SUVs and pickups that tower over you. There’s a Sport Mode to give you more power and that accentuates the downshift crackle as you slow the car heading into a turn. Oh my!

Braking is fantastic from its disc brakes, red Brembos with 13.7-inch 4-piston discs up front. An electronic rear differential and launch control make Supra a hoot from a standing start too. And 19-inch Michelin performance-rated tires aid traction and cornering.

And while you can’t get a manual tranny, the paddle shifters give you instant up and downshifts, while letting your left leg take a well-earned vacation.

Inside, the red test car was bathed in black leather — seats, dash and steering wheel, with gray accent stitching. There’s a carbon fiber look to the console and gloss black trim on the doors’ armrests and the center stack wrapping down around the console. Flat black and matte silver trim the dash, air vents, door release and the steering wheel’s hub is flat black. That’s good, avoiding glare that chrome hubs often create. However, I wish this wheel was flat-bottomed to create a bit more knee room when entering and exiting. Such wheels also look racier.

The dash layout is fine and the JBL sound system here is a winner, plus there’s a wireless phone charger under the center stack. Sadly it includes an intrusive cover that makes retrieving your cell phone awkward at best. The car Will warn you though if you’ve left your cell phone behind after turning the car off.

Seats are wonderfully shaped, as race seats should be, with tremendous side support for the back and hips. The driver’s seat is powered with a couple memory settings too, plus both front seats are heated on the Premium model.

I found the cockpit comfortable and roomy enough while still feeling compact and sporty. One downside to the car’s slinky looks though is large A-pillars that somewhat obstruct side frontal views.

The Premium model also comes with some standard equipment you don’t get on the base model, including that rocking 12-speaker JBL sound system with 500 watt amp (coulda used that in the dorm years ago), the wireless charger, color head-up display, Supra Connect communications system, Apple CarPlay and an 8.8-inch touchscreen. A 6.5-inch screen comes on the lower model. 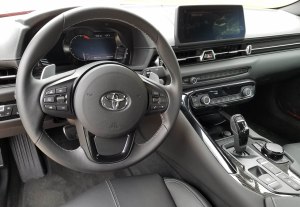 How’s cargo space? Not great, but you wouldn’t expect to carry bags of mulch in back. The Supra has 10.2 cu.ft., or room for a couple small bags under the hatch. But you’re probably not going cross country with a significant other in this, more likely a short weekend getaway.

Gas mileage? Hey, this has 335 horses. I got 23.4 mpg and was admittedly heavy on the accelerator more than with a sedan or crossover. The EPA rates Supra at 24 mpg city and 31mpg highway. 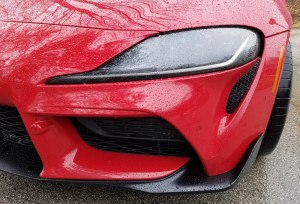 How’s that stack up to competitors. A new mid-engine Chevy Corvette with automatic transmission starts about $9 grand higher, although, the Vette is available with a manual transmission. A Jaguar F-Type would cost you about $20 grand more and a Porsche Cayman about $10 grand more. So, go for a premium nameplate, or save some cash and still enjoy Supra’s sexy looks.

Your call! I can’t afford any of these sports cars! But if cost is holding You back too, consider a Mazda MX-5 Miata or Nissan Z car.

Made in: Graz, Austria