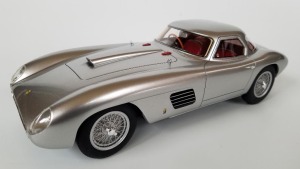 The Ferrari 375 MM Scaglietti Coupe is a sexy dart of a sports car with a distinctively long nose that may have brought automotive overcompensation to a new level in 1953.

Now CMF, a new die-cast firm to me, delivers a beautifully sculpted and executed resin version of this rare sports car to the 1/18 scale market. CMF comes to us from Germany and, like most die-cast and resin car models, is made in China. Each of its models (mostly high-end and exotics) is created in limited runs of 300 cars, each hand-numbered. In the U.S. market the brand is sold by American-Excellence, which sent us our sample.

I admit that I’ve seen this car in magazines and books, but didn’t know much about it, probably because of its rarity. Only five of these road-going Speciales were made, and owned by folks like film director Roberto Rossellini, who actually owned two after one was wrecked. One was built specially for his wife, actress Ingrid Bergman, and this one is the wrecked car that Carrozzeria Scaglietti created this spectacular new aluminum body for.

Most of the Ferrari Scaglietti coupes were strictly racers created to compete in the World Sportscar Championship and ran in the Targa Floria, at the Le Mans 24-hour race, and the Mille Miglia, which is where the MM part of its name comes from. Cars were made until 1955 and featured 4.5-liter V12 Ferrari engines creating about 335 horsepower. Reportedly only 26 units were made overall, most of the bodies were made by Pininfarina, a famous Italian car stylist and body maker. 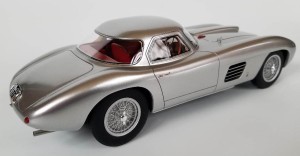 In addition to the Mille Miglia and Le Mans, the car also placed fourth and then second, respectively, in the 1953 and 1954 Carrera Panamericana in Mexico. Famous drivers of the racer included Formula 1 champions Mike Hawthorn, Alberto Ascari, and Giuseppe (Nino) Farina, along with Luigi Villoresi and Umberto Maglioli. The racing version won the 1953 World Sportscar Championship.

In 2014 the Rossellini car, now owned by Microsoft’s John Shirley, was awarded the Best of Show at the annual Concours D’Elegance at Pebble Beach. It was the first Ferrari to win the honor.

First, the model’s silver paint job is perfect, probably better than the original car’s paint quality. So this is a beautiful, long-hooded car with a slim and lengthy air scoop centered on the hood and two plastic, but leather-look hood latches and photo-etched hood grips on either side of that hood.

Seams and creases are crisp and beautifully executed, so even though the doors, hood and trunk do not open on this sealed body model, they look as if they could.

Markings are miniscule, but sharply executed with a rectangular Ferrari black horse logo on the nose and blue, yellow and red Scaglietti Modena logos on the lower front body panel, just in front of crisply executed side vents. 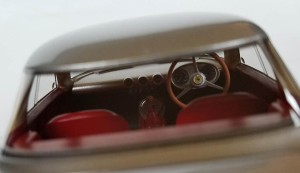 In front are two headlights with clear lamp coverings and a photo-etched metal grille with white running lights and turn signals. In back two itty-bitty red taillight lenses dot the curvaceous Jaguar-esque rear fenders. Remember, most of these cars were racers, so not a big need for large taillights. There’s also a small trunk release in back and a black and white Rome license plate. Doors have beautifully executed door handles with center release buttons visible.

Look for twin hollowed tailpipes in back, a modestly detailed black undercarriage and black treaded tires with handsome wire wheels.

Inside, the interior is a dark red with two bucket seats and a wood-look steering wheel with chrome three-spoke hub and Ferrari prancing horse logo at its center. Nicely detailed dash gauges, including three round ones to the left of the right-drive steering wheel, are most visible through the large wraparound rear window. There you can also see a console with shifter featuring a wood-look knob atop it. 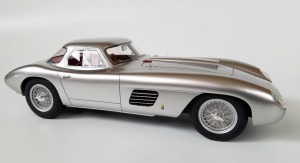 The car’s side windows also are created to look like there are two panes, one that would slide back to let in additional air, and each have a silver grab knob in their lower front corner.

Beautiful car in reality, and finely executed by CMF. The only item on my wish list would be an opening hood to reveal that beastly V12 engine.