I’m a sucker for 1/64 scale die-cast cars because I grew up garaging Matchbox and Hot Wheels in shoe boxes and plastic carrying cases. Just entering my teens when Johnny Lightning debuted 50 years ago, I was impressed with its castings’ quality and realism compared with the other brands.

Now Johnny Lightning is celebrating its 50th anniversary and its parent, Round2, is creating a series of Themed 2-Packs that are worthy of being in any modeler or collector’s display case. The latest is release 1 of its Barn Finds and Nickey Chevrolet castings. As always, the display cards are stellar and challenge you to keep these 2-packs intact, and clean, or open them and enjoy the feel of die-cast model cars. Tough choice as I’ve said before.

Here’s a quick look at both packs. 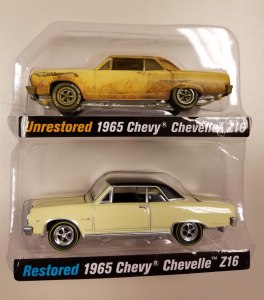 Modelers should love this, just for its theme and the look of a weathered car. Johnny Lightning takes its fine 1965 Chevy Chevelle model and creates the Z16 variant in its unrestored “barn find” state, and then as it appears restored to its creamy crocus yellow with black vinyl top beauty. The display card says these represent a rare Z16 model owned by Jeff Helms, the unrestored being as the car was shown at the 2018 Muscle Car and Corvette Nationals. The Z16, one of just 12 surviving in this color scheme, is being fully restored.

The barn find version features a fine layer of dust and grime on its finish, plus rust spots and scrapes along the front driver’s side fender, a lesser one back over the rear wheel and a bit on the passenger’s side. Paint is faded and there’s a mottled patina to the whole car. The trunk lid is a faded darker brown the front and rear chrome bumpers are dull and gray as if the car has been exposed to dirt and grime for years. The hood features a darkened blackish brown hood scoop that had been attached to the car years ago, after it left the factory. 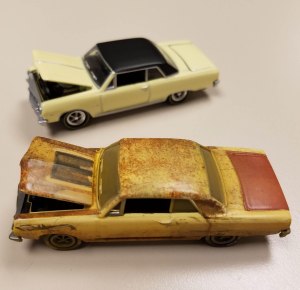 Windows are fogged too, although the black interior looks basically the same as in the restored casting, as does the red, black and silver engine and air cleaner under the hood, whose underside also is clean. Best to pose this one with the hood down and the restored version with its hood up.

Tires and wheels also are dirty to wrap up the weathered theme. The rubber treaded tires are labeled Super Star Belted.

The restored Malibu is crocus yellow with flat black roof to simulate vinyl plus silver trim around the windows, on door handles and rocker panel trim, with a chrome-look streak the length of the hood. All britework is clean and shiny, as are the five-spoke custom wheels. Tires are clean white sidewalls with no branding and all windows are clear, the windshield including molded-in wipers

Nickey Chicago is how the Nickey models are labeled as Nickey Chevrolet that once was the largest GM auto and performance parts dealer in the nation is now known as Nickey Performance, always with a backward K in the logo. Some say Nickey invented the modern super car.

The dealership opened in 1925 and was the first to install Chevy’s powerful 427ci engine into the 1967 Camaro. So naturally this 2-pack includes a red ’67 Camaro SS with white nose stripe and big Nickey logo on either door. Tires are red-stripes and wheels are five-spoke chrome. The interior is black and the hood opens to reveal that big Chevy engine under the hood.

The other car here is a 1965 Chevy Nova SS with a giant chromed V8 with stacks protruding from a hoodless car painted light metallic blue. There are chrome wheels up front, but larger black wheels and tires on the rear of this dragster version. The Nova’s interior is a blue to match its exterior.

Fun stuff at a modest price keeps the Lightning cars affordable and a great way to expand a collection with space limitations and costs in mind.