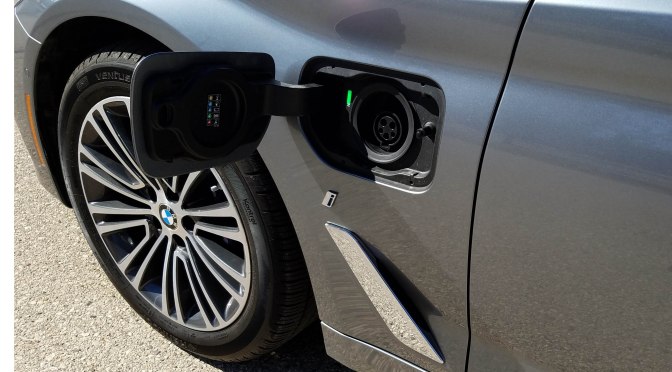 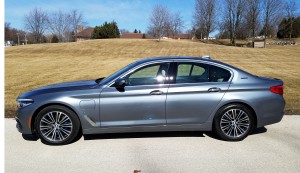 The 530e sedan defines why BMW can justifiably lay claim to building the “ultimate driving machine.”

This plug-in hybrid exudes everything one would want from a luxury car, with the added benefit of a hybrid system.

Styling is elegant and tasteful with enough crispness to keep this BMW from being a staid old fuddy-duddy-mobile. You see it and know the owner has deep pockets, but it’s not boxy and aloof, it’s profile and long hood indicate there’s a bit of fun left in the owner’s gas tank.

Then there’s all the good stuff BMW is noted for, power, handling and ride. All are aces here. Yet there’s something else you might not expect. It’s what that tiny “e” in the name indicates — the electric power this 530 uses to augment both its gas power and its gas mileage.

Working with BMW’s trusty 2.0-liter twin-turbo I4, a 111-horsepower electric motor and its accompanying batteries and hybrid system, boosts power to 248 horses and torque to 255 lb.-ft. It does this via an 8-speed Steptronic automatic transmission that behaves so smoothly as to never call attention to itself.

The result is a dreamlike ease of operation and quietness that borders on otherworldly. You rarely can tell whether you’re running on electric power or gasoline-induced grunt. 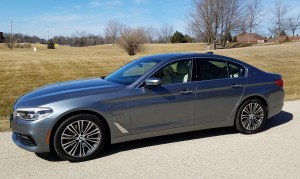 In any case, the electric part of the hybrid system propels the roomy sedan up to about 25 mph before the gas-engine slickly eases into the mix. The result is excellent power and luxurious linear application of it.

Three settings allow you to go with Comfort (the default), Eco Pro (for max economy) and Sport, the one you’d use when getting on a freeway or just having a bit of fun. Comfort is perfectly fine 99% of the time.

No matter, you’ll still get good gas mileage with the hybrid. I managed 28.4 mpg in a mix of city and highway driving, while the EPA rates this as having a combined fuel economy of 28 mpg. Rare that I actually exceed an EPA rating in a test drive.

There is one downside though to the plug-in. While charging is easily handled with a big power cord that neatly stores in the trunk and is plugged into an outlet behind a fuel-cap style door on the driver’s side front fender, range is short. On a couple of cold mornings I managed just 12 miles before the battery charge wore off, not quite enough to get me all the way to work.

Of course the gas engine takes over and you barely notice the change. But some smaller plug-in hybrids are now getting up to 35-40 miles per plug in charge. BMW claims a 15-16 mile range.

Handling is sporty and precise, but smooth as all get out. I found the car handled so well in Comfort mode that I rarely switched to Sport, although that firms the wheel’s feel and boosts low-end power by holding lower gears longer. Again, smoothness is the order of the day.

Ride likewise is well-controlled and pleasant, as it should be in a car with a 117.1-inch wheelbase. No surprises even on our worst area streets. Railroad tracks are a mere wrinkle under the car’s superior suspension. The 530e rides on 18-inch tires and this model also featured xDrive, BMW’s all-wheel-drive system. On one snowy morning I found traction good on slippery streets while under normal acceleration.

Although I did find a parking lot that had not yet been plowed and used it for a heavy snow test. It was still easy to get the BMW’s rear-end to break loose and attempt to come around during heavy acceleration and quick turns. Like most cars, best to go easy on the accelerator when road conditions are iffy.

Inside, the 530e feels and looks luxurious as its $55,695 (with delivery) starting price would insinuate.

The silvery blue (Bluestone metallic costs $550 extra) test car featured a black over tan dash with light wood trim and an illuminated blue accent strip extending across the dash and doors. Seats were a tan leather and there was a gloss black trim by the shifter and center stack controls. Wood trim is dominant on the console.

BMW’s soft leather wheel is easy to grip and is a power tilt/telescope unit. The wheel also is heated, part of an $800 cold weather package that also includes heated front and rear seats. This package was one of 14 options on the test car, which added up to push the price up, the tested 530e cresting $68 grand.

Seating is a bit snug up front, especially for the hips, but offer excellent back and kidney support. Plus these are powered, in fact, they are 16-way adjustable, including power headrests. There also are two memory settings for the driver’s seat. In back is a spacious rear seat that riders affirmed was quite comfortable.

Behind that seat is a truck with raised floor to accommodate the batteries for the hybrid system. That is somewhat limiting, but still the BMW had 14.5 cubic feet of space, room for a couple sets of golf clubs. The floor also has a notch in it so the front edge can be lowered to carry smaller items and keep them from rolling about.

Overhead is a sunroof, plus power sun shade and an SOS emergency system.

BMW’s dash design is fine, but the buttons are all pretty small, making them less easy to use if the driver is wearing gloves. And while the test car was well equipped with all the amenities, the additions created a $68,760 sticker price.

For instance the driving assistance features, including head-up display and lane departure, etc. adds $3,400. Heck the head-up alone was $1,700. Not worth that at all!

Then there was a lighting package with adaptive LED lights and automatic high beams for $1,050, and a parking assistance package with parking assistance plus, active park distance control, rearview camera and 360-degree surround view camera for another $1,300. That’s right, the rearview camera isn’t standard on this nearly $54,000 luxury sedan. Most such systems are standard on $35,000 cars these days, or are a modestly priced option.

Functionally there’s an M series sport brake upgrade for $650. If you’re a heavy-footed driver that may be a smart option.

A few other add-ons include dynamic damper control for $1,000, soft-close automatic doors at $600, ceramic dash controls for $600 and something called gesture control for $190. This later one sounds like something you’d like other drivers to have to reduce road rage, but it’s really for the infotainment system.

Gesture control allows you to make gestures near the large infotainment screen instead of having to go to the annoying trouble of actually touching a button or turning a knob. For instance, it allows you to turn up the volume by circling a finger clockwise, or turning it down by circling counter-clockwise. Or if you’d like, you can accept a phone call by pointing toward the touchscreen or reject a call by swiping your hand to the right. Oh my, how lazy are we?

Standard features include blind-spot warning and smart cruise control. Plus the navigation system includes real-time traffic info and there’s a 205-watt 12-speaker stereo and, get this, a CD player. Yes, some of us still have plenty of CDs.

Overall this German luxury sedan is a beautiful thing to behold and to drive. It’s a bit surprising how many features that are now standard on other luxury makes, and mid-priced vehicles, are still options with BMW. But at least this practice allows a buyer to really equip the car to their specs, not a factor dictate.

Still, there are a lot of delightful luxury sedans out there, some that are more stylish, some that are less pricey, although not cheap. For instance Volvo’s S90 and Lexus’ GS offer more dramatic styling and cost less. While diesel lovers can only select a Jaguar XF, as there are no other diesel-powered luxury sedans in this segment at the moment.

And if you prefer gas power to a hybrid, BMW has plenty of other 5 Series choices.

In any case, I don’t think you’ll find anything that drives better than a 5 Series. And until autonomous cars take over, good ride, power and handling are still among the best features any vehicle can offer to set itself apart from the crowd.

Made in: Dingolfing, Germany