Trucks are the big haulers we see every day, on the highway, behind the grocery, in the office parks. Usually they have a big ol’ trailer behind them full of goods that make the world go round.

So it’s only natural that they have fans, just like cars, racers and motorcycles.

Now NEO has the answer for truck collectors, beautifully detailed 1:64 scale tractor trailers of historically significant models. Our samples were a light blue 1960 Mack H-673ST and a 1963 International Harvester (IH) Fleetstar F-2000-D in red with a white beltline.

These trucks were workhorses, the Mack’s chassis weighing 13,025 lbs. and featuring a 10-speed transmission to put its 205-horsepower turbo diesel to work. That may not sound like much, but the Thermodyne engine boasted a torque rating of 560 lb.-ft.

This was the cool cab-over design too that used a manually engaged hydraulic lift to tilt the cab forward to facilitate maintenance. Mack made 550 of this model from 1958-’62. They included a sleeping compartment behind the cab.

The IH Fleetstar was a step up from the Loadstar and was made from 1963 to the mid-1970s when the S-Series was developed. This had a conventional cab and the F-2000-D boasted a heavy-duty diesel engine mounted in a super-strong ladder frame. Engines came from Cummins, Caterpillar and Detroit Diesel.

The bulldog Mack with its flat nose and cab-over design is a knockout. You can about imagine a mechanic tipping the cab forward to work on its mighty 6-cylinder diesel.

Detailing is fine with photo-etched twin pyramid-shaped grilles, quad headlights and amber turn lights atop the fenders. There are twin chrome horns above the driver’s door and massive (for the scale) chrome mirrors on either side of the cab, plus five cylindrical chrome lights atop the roof. Chrome door handles and grab bars are on each side for driver and passenger.

Steps are textured and yes, there’s a tiny bulldog logo on each side of the cab too. A tall chrome exhaust stack, with a slight bend at the end rises above the cab behind the passenger’s side.

Since there’s no trailer here you get to see the twin chrome gas tanks, the flat black chassis and all the tires, four sets of dualies naturally. The wheels are 6-pointed star patterned.

The IH beast is equally impressive, but looks longer with its standard nose that pushes out front of the cab. It too has the five lights atop the cab, two giant horns mid-roof and big side mirrors. The IH exhaust stack is straight and indented to look hollow.

There’s a big nearly square PE grille, plus single lights and fender-mounted turn signals, plus PE International script along the hood’s side. Gas tanks are black and mounted under each door with a foothold amid each. A mesh PE floor piece rests amid-ship on the chassis before the four sets of dualies and fifth wheel hook up.  Wheels are well-detailed red five-spoke models.

Like other NEO models these come in sturdy acrylic cases with black plastic bottoms that include the truck’s name. Considering the detailing in these resin truck models, the pricing is moderate at $67.95. 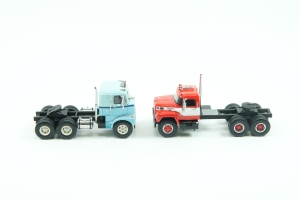