The former Chrysler 200 was so long in the tooth you may have wanted to nickname it Snagglepuss.

It was updated a couple years back by Fiat, after it snaggled Chrysler away from bankruptcy and the U.S. government. Mostly, that change in ownership has done nothing but help Chrysler’s various lineups, and the new Chrysler 200 again confirms that.

The midsize sedan, which rides on the Jeep Cherokee platform (see my interview with the lead engineer done at the Chicago Auto Show) so is available with all-wheel-drive, carries the rounded styling first seen on the sporty Dodge Dart. This is a handsome sedan with swept back rear quarter to give it both a modern and sporty profile. The tested C model with AWD tops the 200 lineup and its $30,195 starting price reflects that. This isn’t your great aunt’s old Chrysler 200 winter beater car.

The 200 comes in basic LX trim with a list price of $22,695 and in that form is front-wheel drive with a competent 184-horse MultiAir 2.4-liter 4-cylinder engine. A mid-level S model is available in all- and front-drive as is this upscale C model.

This C stands out due to its more powerful 3.6-liter V6 that features variable valve timing and delivers 295 horses and a torque rating of 262. Tires also grow to 18 inches and the interior is decked out with leather trimmed heated seats and a load of bells and whistles. The vivid blue pearl (bright metallic blue) test car ladled on three option packages to doll itself up and hit a rather optimistic $34,675, including a $795 delivery charge.

The car itself feels more modern and refined that past 200 models. The engine is strong and will get to highway speeds easily, even with four people aboard. This is a fine highway cruiser for the family and the giant 16-cubic-foot trunk will accommodate a load of luggage.

While the car feels strong, it doesn’t really jump from a stop as you might expect. It feels heavy despite a moderate 3,473 lbs. Its 9-speed (that’s right!) automatic transmission is designed to save gas, but not to put the car on a speedy trajectory, especially in city driving. The car is rated 18 mpg city and 29 mpg highway. I averaged a fine 24.2 mpg in about 75% highway driving and with up to four aboard.

Chrysler certainly may be proud as the only mainline automaker with a 9-speed automatic, but the tranny shifts abruptly in low gears and sometimes feels as if it’s hunting (sometimes unsuccessfully) for the right cog. Ultimately the 9 gears are to save gas, but shifting smoothness still needs some work.

Again, I’ve got to mention the car’s AWD feature, as most moderately priced family sedans do not offer this, outside of Subaru’s Legacy. This will help you gain traction in snow and on slick roads. I only drove this in rain once and traction was fine.

Unfortunately Fiat/Chrysler designed the 200 to again feature fairly vague steering, possibly to not put off older or former buyers. But in allowing the car to have soft handling where it feels lean-prone in fast turns, the car is less likely to draw as many 30-something buyers as the manufacturer may have hoped. Ride is above average, especially at speed, but at slow speeds, such as around city neighborhoods, the big potholes and pavement seems still rock the interior. That was surprising for a car with 108-inch wheelbase.

As with most cars, traction control and stability control are standard, as is an anti-lock brake system featuring 4-wheel discs.

Inside, you’ll feel like you’re in an entry-level luxury car, at least in the 200C. The test car featured a black over cream interior with textured black dash and smooth cream-colored, leather-trimmed heated seats. The dash and doors have fake black wood trim and brushed metal look side air vents and trim on the console and center stack. Door armrests are leather covered and padded too.

Gauges and buttons are well laid out. I like the big touchscreen for the radio, navigation and various other features. The main gauges have brushed metal rings around them, labeled “speedometer” and “tachometer,” in case you’re not sure which is which. I like the look though as the design features little pointers for every 10 mph and there’s a restful blue background behind the gauges and which shows up in those pointers. Blue is easy on the eyes at night.

Seating is extremely comfortable, soft without being squishy and enough shape to the seats to provide ample back and hip support. The seats are powered up front and the driver’s includes power lumbar support.

Back seat riders had plenty of leg and headroom and complimented the seat comfort. The rear seats also split to fold for more cargo room, but with the car’s monster trunk, that may only be needed in extreme circumstances, like carrying a ladder.

The Chrysler 200 comes with a manual tilt/telescope steering wheel that’s wrapped in leather, but I found the wheel way too fat for my hands. Smaller drivers, which may include a large portion of women, may not appreciate the wheel’s heft. But there are oodles of buttons on the wheel to help the driver control everything from the digital trip computer (located between the speedo and tach), to an on-board phone, cruise control and several warning systems.

A round shift knob, like that in a Jaguar, rests on the console, but does not raise and lower as in the Jag. It’s easy to use, but be careful not to confuse it with the radio volume knob, tuning knob or more likely, the large climate control knob. They all look similar, but vary in side.

Note too that this car is loaded with sensors, so you’d better be ready for a lot of beeping if you buy a Chrysler 200 similarly equipped to the test car. This one added a $1,295 package that included lane departure, forward collision warning, adaptive cruise control (buttons on the wheel) and parallel/perpendicular park assist. It also had rain-sensing wipers. Almost all these sensing systems emit a beep if you get close to something while parking. For instance, they’ll beep if the turn signal is on and there’s someone in the lane next to you, or when you are approaching another vehicle at possible accident speed.

I’m all for the warnings, and for any assist these systems give. But I’m just giving you, the readers, a heads up that you WILL hear a lot of beeps. Another warning, the roof’s A-pillar combines with the side mirrors to create a large blind spot. Taller drivers tell me it’s less of a problem, but us shorties can’t see over those mirrors.

Also part of a $1,395 package here was a navigation/sound group that included an upgraded HD radio with 9 Alpine speakers and a subwoofer, plus 506-watt Alpine amp, along with the nav and big 8.4-inch touchscreen. Naturally satellite radio and Uconnect also are part of the deal.

About the only thing the test car didn’t have was a sunroof. But it does have large overhead visors are that slide to block side sun. They also featured lighted vanity mirrors. Another plus, the console is several layers, with two cupholders and a pen holder on top, but that slides back under the armrest storage bin to open a large bin for various items, including electronic gadgets as this bin also houses a 12-volt outlet and several connections for portable electronics.

All told, a fine midsize car effort by Fiat/Chrysler. Let’s hope they can improve the ride and handling some to make it a stellar effort.

Hits: Handsome styling outside, luxury look inside. Good power and AWD, plus room for five adults and a load of luggage. Above average ride too and big touchscreen and well-arranged dash and controls.

Misses: Transmission can feel abrupt at low city speeds. Steering is fairly vague and feels heavy, plus steering wheel is way too fat. A lot of sensors here, so the car is beeping at you, a lot and the A pillars are large, creating a blind spot. 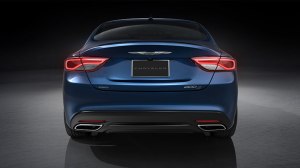