CMC’s new Ferrari a masterful recreation of a racing beauty 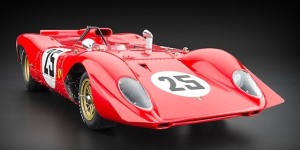 By 1969 Ferrari had already been embarrassed by Ford and its GT40 for several years at LeMans and at various other endurance racing venues. It also had boycotted the 1968 sports car endurance season after its 4.0-liter 330 P4 was banned, after winning the 1967 championship.

So hopes were high when the proud Italian racing team rolled out the 312P Spyder and put open wheel hot shoes Mario Andretti and Chris Amon in its cockpit. This racer was based on Ferrari’s successful Formula 1 racer, the 312. The P here stands for Prototype and behind the driver was Ferrari’s 3.0-liter naturally aspirated V-12, that’s where the 312 nomenclature comes from.

First time out Andretti put the car on the pole for the 12 Hours of Sebring and he and Amon managed to finish second overall, first in class. This gorgeous 1:18 scale CMC model is of that racer, chassis No. 0868. Two other 312P Spyders were made and raced, one being badly damaged in an accident and never returning to the track. By the time Ferrari got to LeMans, its intended target for the racer, it had decided to reconfigure the car with a covered cockpit, for better aerodynamics. CMC also offers that model, the Spyder Berlineta now.

It’s hard to put too many superlatives in front of a description of any CMC model. This Ferrari 312P is both beautiful in its design execution and in the detail that CMC delivers in a model containing more than 1,000 diecast and brass parts.

First, its shape and Ferrari blood red finish are exquisite, plus the racer’s nose pops off to expose the finely detailed chassis, radiators, front suspension, copper lines, cooling intake hoses for the brakes and the steering mechanism. One surprise though, the wheels are fixed, not steerable. However, the wiring, plumbing and monocoque chassis are excellent.

The two scissors-style doors flip up on realistic dual hinges and expose the ventilating tunnels that ran through the sides of the car’s bodywork to expel tire heat. You also see the stainless steel body work here with realistic looking riveting and on the passenger side (although no passenger rode along) is a detailed electrical panel.

With the doors up you easily see the red leather-look interior with detailed blue shoulder harness and photo-etched safety clasps. The metal gear shift lever and dash are finely detailed with a minimum of dash gauges, as was standard at the time, plus a three-spoke racing wheel with prancing horse logo at its center.

Behind the black roll bar is the giant rear bonnet that flips forward to expose the Ferrari’s 430-horsepower V-12. The model also includes a giant air scoop that mounts over the exposed spun metal headers that protrude through the rear cowl. A small pin holds the scoop in place, a plus for keeping it properly located while on display on your desk.

The engine is a work of art with a series of white exhaust pipes snaking off its sides and exiting out back, just below the cowl. All the proper wiring and plumbing is in place along with some early electronics and much suspension detail is visible. The 312P featured independent suspension with uneven-length wishbones, coil springs front and rear, along with telescopic shocks and anti-roll bars.

There are giant disc brakes too, which can be exposed by loosening the three-winged spinner nuts on each wheel, which are a five-spoke design finished in flat racing gold. All tires are treaded and feature the Firestone logo.

The car’s only markings are the black No. 25 in a white circle on the hood, deck and doors, plus the Ferrari crest on the nose and sides, just in front of the doors. This is how the car appeared when it rolled off the trailer in Sebring, sponsor stickers were added later, but this presentation allows its external beauty to shine through.

Other details include tiny brass latches for the brass doors and twin opening gas caps that expose through the nosepiece. The caps also include clasps to latch them shut. The racer also sports two well mounted mirrors, one on the nose and the other on the would-be passenger’s side door. Headlights also are superb under clear lenses detailed with four mounting points.

In all, the 312P is another stellar model by CMC that continues its dominance among the higher-end die-cast model car makers.

At $400+ this model is not for everyone, just like real Ferraris. But such detail makes this a fantastic centerpiece in a sports car or Ferrari display. A red Ferrari racer that was driven by Mario, what’s not to like?

Purchase this and other Ferrarris at Racing Heroes.