There was only one Elvis and there is only one Richard Petty. Both are Kings. 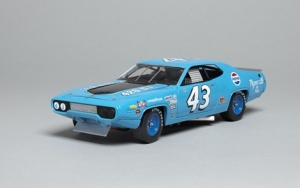 With Petty, NASCAR, or better yet, stock car racing, was his kingdom and he rules it still, behind dark glasses and under a crowning cowboy hat with a feather cluster and medallion, sort of the racing version of a heavyweight boxing championship belt.

All racing fans know Petty and they know that any Plymouth in Petty blue with a giant white No. 43 on the roof, doors and trunk is a racing icon. That’s what AutoWorld’s newest 1:18 is, and a welcome addition to the diecast stock car market.

There’s no mistaking this 1971 Plymouth Road Runner for anything other than Richard Petty’s Daytona 500 winner from that year. It’s also the car he captured his third NASCAR title in, and his 120th win. Not surprisingly, AutoWorld does a fine job delivering an authentic looking die-cast stock car champion model.

Like many of AutoWorld’s muscle car models, the Road Runner’s wheels are steerable and the hood opens to reveal what was a thumping 426 cu.in. MOPAR V8 that powered Petty to dominance in 1971. At Daytona, he edged teammate Buddy Baker by a car length to win the 500, and then ran away with the season.

This diecast model has giant Goodyear slicks with appropriately large lettering on the sidewalls. The tires are mounted on medium blue racing wheels with a five bolt pattern on their face, looking very stock compared with today’s high-tech NASCAR buggies.

Inside is the sparse, but accurate cockpit of the day, complete with red fire extinguisher on the roll bar next to the driver’s seat. Yes, there’s a white window net too. And speaking of stock, the car’s dash still has the faux wood finish so popular in in the 1970s. On display it all looks fine, but the black steering wheel, window net and roll bar do looks a bit too much like the plastic that they are. But at this price, just $87.99 MSRP, that’s to be expected.

In 1971 the racers really were stockers still and the Plymouth’s lights are blacked out, but the pair on the right are painted with the No. 43 over the lenses. How cool is that?

There’s also a flat scoop under the nose that both aided cooling and down force to keep Sir Richard glued to the ovals. Naturally the red and black V8 under the hood looks good, with red plug wires, but I wish you could raise the hood a little higher to display the model with its hood up.Yet the exterior is what you’ll likely enjoy the most, and it’s well executed with realistic sponsor decals and logos. Racers weren’t coated in sponsor attire so much in 1971, but there’s a white Plymouth by Petty decal on the rear quarter panel, plus smaller STP, Union 76, Wix filters and Hooker Headers logos, plus a bigger Pepsi logo just below the C pillar.

Hey, Petty is the “King” of NASCAR, winning 200 races, the most ever, plus seven NASCAR championships and seven Daytona 500s. Guys like Dale Earnhardt and now Jimmie Johnson haven’t caught up to him yet, and it seems unlikely anyone ever will. With a career spread from 1958 to 1992 Petty was, and IS Mr. NASCAR.

You’ll want one of his racers in your collection, and this is a good place to start.