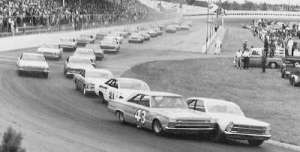 Back in 1967 stock cars weren’t anything fancy, in fact, they were pretty much just that, stock cars with headlights taped up and numbers painted on the sides. They still had stock bumpers and bodies – no templates!

There were a select group of top drivers then, just as now. But long before Jimmie Johnson, Jeff Gordon and Dale Earnhardt there were Richard Petty and David Pearson. In the mid- to late-1960s they were the top dogs, by a long-shot.

So Revell-Monogram’s offering, Pearson’s No. 17 Ford Fairlane will be a popular model among slot car racers who enjoy vintage machines. 1967 was the year Pearson switched from Dodge to Ford mid-season, jumping to the successful Holman-Moody Team. That meant he only had 22 starts in 48 races, but still finished 7th in points. Pretty impressive!

The year before Pearson was NASCAR Grand National champ and he would add two more titles in 1968 and ’69 to become the second three-time champion, Lee Petty being the first. Others may consider Lee’s son, Richard, to be the King of NASCAR, but there are plenty of others who’d argue for Pearson, who often raced less than a full season and still was near the top in points.

Overall he has 105 wins, second only to Petty, and 113 poles, again second to Petty. But in head-to-head racing when the two finished first and second in a race, Pearson won 33 to Petty’s 30. He also was the Darling of Darlington, winning 10 times and posting 12 poles, better than anyone, ever, on what was considered NASCAR’s toughest track.

Pearson, known as the Silver Fox due to his prematurely gray hair, last won in 1980, at Darlington and raced sparingly until 1986, finishing 10th in his final race. 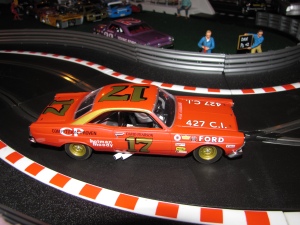 This Monogram car is a simple, but attractive reproduction of Pearson’s 1967 Ford Fairlane, sort of a faded red with gold No. 17 on the roof, trunk and doors. There were fewer sponsors then, so you’ll only see Holman Moody and Ford logos with about a half dozen others on the body, plus two white 427 C.I. stickers on the hood indicating that a racy V8 was under the hood.

Inside, there’s a Spartan interior with driver, seat, dash and roll bar, again nothing fancy.

Performance is where this historic stock car excels over earlier stock car models. I have a 1963 Ford Galaxie racer from Monogram that is nowhere near as fast as this Fairlane. Plus the Fairlane isn’t quite as long, so tends to fishtail less in turns. Yet the chassis appears to be the same layout as the previous model. Hmmm!

Magnets front and rear keep the car fairly well grounded and I turned several sub 6-second laps on my home track, compared to 6.8 with the older model. Power is good in a straight line, but there is a fair amount of motor and gear noise. Still, the car handles well and looks good in motion, making is more fun to drive than the newer NASCAR look-alike cars.

If you’re just getting into 1:32 scale slot car racing, you should know too that Revell offers at least five other 1967 Fairlane models, including those driven by Mario Andretti (yes he raced NASCAR and even won at Daytona), Dan Gurney, Parnelli Jones, Fred Lorenzen and Wendell Scott. These are fun racers and nothing beats a good class race where everyone is driving nearly identical equipment.