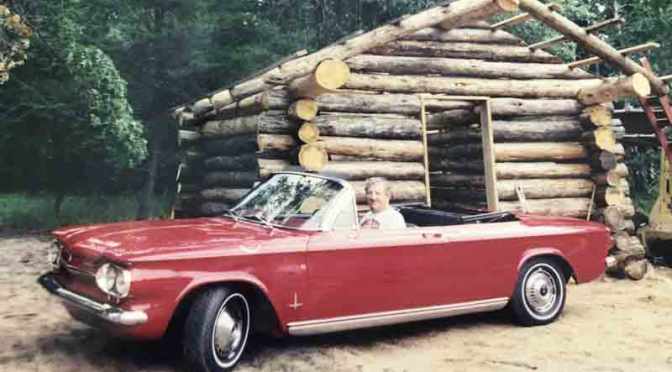 More valuable to this family than any other car 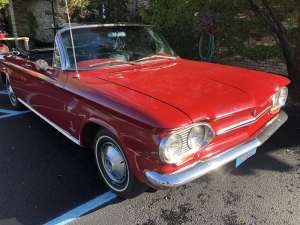 I love going car spotting but sometimes the cars come to me like this 1963 Corvair. One of the fun things I do during the summer is work at Ironwood Golf Course, about five minutes from my house. One day I show up to work at a really big golf outing and what’s parked right out front? This 1962 Corvair Monza Convertible. I love Corvairs! I asked my boss/friend/neighbor, Mike, who it belonged to and he pointed me in the direction of the brothers running the outing Paul and David Miller Jr. It turns out that this car has a story like many others as to why it was parked there. It was restored by their dad, David Sr, who passed away in 2010 from Leukemia and this outing, So Long To Leukemia is held each year raising funds to find a cure.

Dad was a Dodge guy

But that didn’t stop him from taking on a Corvair project. It actually started out when a guy he knew had a Corvair project going and just lost interest and gave the car to David. That’s a great way to get a project started.  The reason the guy may have given up is that his car was too far gone. So when David Sr, and his wife, Doris, were vacationing in Arkansas, they found another Corvair he could use for parts and got it for a song, $400, in 1986.

I’m not going to go into the whole Ralph Nader thing about the car because it wasn’t him who killed as much as the bean counters at GM and competition from the Ford Mustang. The Corvair’s reason to being was built in response to the compact cars that hit out shores in the early ’60s. Built between 1960 and 1969, it’s still the only American-designed, mass-produced passenger car with a rear-mounted, air-cooled engine. It was built as a 4-door sedan, 2-door coupe, convertible, 4-door station wagon, passenger van, commercial van, and pickup truck body styles.

So back to Wisconsin are both cars when David Sr. started the restoration. Wrenching was nothing new to him since he grew up on a farm where things got busted all the time. He did most of the work

on the car himself with the exception of the final paint job that he sent out to have done. He did get help from his family along with

some Corvair guys. Wife Doris remembers helping him put in the new dash and the boys remember going to the junkyards to help him find parts. The car was on the road in August of 2002 after putting about $7,500 in parts and labor into it. It was a labor of love for David and he drove it everywhere including to what his other passion was golf.

A huge pothole in the road

In the late summer of 2010, David Sr. wasn’t feeling well and had to give up playing because he got too tired. He went to his doctor where he was diagnosed with Leukemia and just a few days later passed away when his heart failed. Three years later the family started the golf outing and it is has gotten bigger every year. It uses all 27 holes at Ironwood and is one of the largest outings of the year.

Since it has begun it has raised hundreds of thousands of dollars to find a cure for Leukemia, something I’m also familiar with since my mom too passed away from it. You can see that participants have a

blast at the event and they love seeing the car parked up front near the registration table at Ironwood. This year’s outing is September 11th and you can go here to register.

1.7 million Corvairs were built over the ten-year run. There were 44,165 Monza convertibles built in 63 which is quite a lot compared to 1969, the last year of production when on 521 were built. This car

is pretty basic with manual windows, am radio and a two-speed automatic transmission. There are a few spots that could use some attention. There are some cracks on the driver’s side armrest, wear on the back seat near the top and a couple of touched up chips on the paint. Not too bad at all for a car that is 57 seven years old. If you go by Hagerty Collector Car Values, it would be in fair condition and worth about $12,000. Corvairs are a great way to get into vintage cars because of their low costs and a very active owners group.

Is this one for sale? Well not really because of the sentimental value to the family. The car is in Doris’ name although she has never driven

it. The caretaker of the car right now is David Jr. but Doris says one day it will go to one of her grandkids. Do you think you could adopt me, Doris?