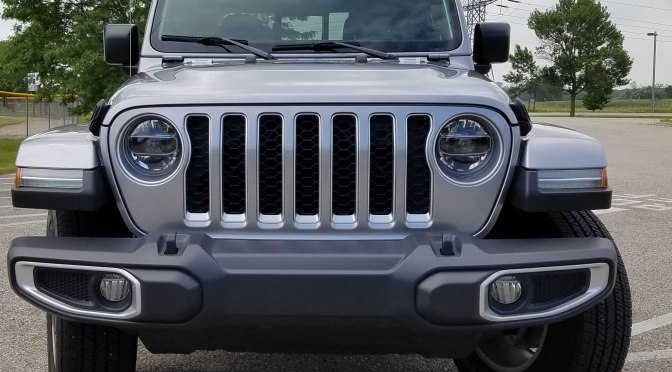 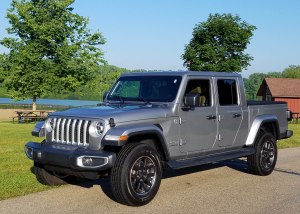 You’ll either want a Jeep Gladiator pickup, or you won’t.

What I mean is the long-awaited Jeep pickup is an image vehicle as much as it is a pickup. That’s not to say it doesn’t function well as a pickup, it certainly does. But it looks like a Jeep, and that’s really all that matters.

Case in point, my sister-in-law declared it an “ugly thing” while another female rider, who loves and owns Jeeps, said it looked “fantastic.”

Years ago Jeep made a compact pickup, the Comanche (so long ago Indian names were acceptable). That last sold in the States in 1992 and Jeep-aholics have been clamoring for a Jeep pickup ever since, especially the last 10 years as Millennials developed into retro-product fans and Jeep sales started climbing. 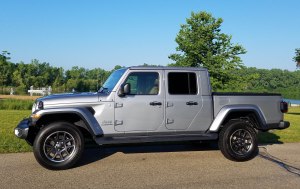 But, as the U.S. market now clamors for mid- to full-size pickups, Jeep smartly developed its Gladiator (no one protesting that name) as a mid-size. That means it pushes bumpers against the likes of Toyota’s top-selling Tacoma, Chevy’s Colorado and now Ford’s new Ranger (more on that next week). Wisely, it doesn’t butt heads with the Chrysler’s Ram, Chevy’s Silverado or Ford’s F-150, the three top-selling vehicles in the U.S.

Gladiator looks like a Wrangler with a pickup bed welded to the back end, but Jeep PR folks will hasten to point out it’s far from that, developed from the ground up so it’s more solid, stable and truck-worthy than a transitioned Wrangler might be. In fact, the Gladiator packs the Ram’s 5-link coil suspension under its bed, and a similar one up front.

Jeep reports the Gladiator will tow between 4,000 and 7,650 lbs., the higher number best among mid-size pickups, and has a payload of 1,600 pounds. That’ll get the job done for most backyard projects or tow a fishing boat or camper to the outback, no problem. 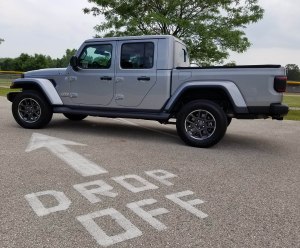 And as is typical with a Jeep, it will crawl over rocks, bushes and wade streams to get where you want to go, if you require such. Its Command-Trac 4WD system is easily engaged via a stubby shift lever on the console, just a bit to the left of the 8-speed automatic’s taller shifter. That 8-speed is an option on the Gladiator Overland model I drove, adding $2,000 to the bottom line.

Well, but not quite as refined as other mainline pickups, such as the Ranger. There’s a Jeep feel, and one suspects that if you’re a Jeep lover, this will be considered a benefit. But there’s a lot of steering wheel play, which is great for off-roading so that when you graze a rut or boulder the steering wheel won’t snap from your hands and either scare the bejeebers out of you, or hurt your wrists. The downside is you’ll be sawing on that wheel constantly while driving the highway to keep the Gladiator from wandering toward the next lane.

Power from Jeep’s 3.6-liter V6 with variable valve timing is fine. The V6 packs 285 horsepower and 260 lb.-ft. of torque and if you mash the accelerator it’ll push the Gladiator up to highway speeds easily and without a lot of noise, unlike the Ranger. 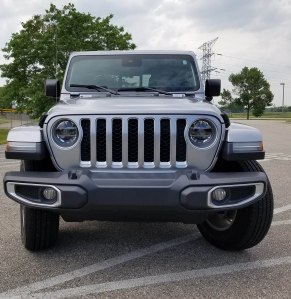 That 8-speed tranny shifts well and uses the power efficiently, although there’s a fair amount of whine from it and the tires once you hit 30 mph and beyond. There’s also a bit of wind noise, courtesy of the nearly straight up windshield, a Jeep standard, that also will fold down if you’re in an off-roading mindset.

Ride, well, most pickups are a bit bouncy, but the Gladiator delivers more bounce per ounce than some, creating a Jeep-like ride. The last Wrangler I drove seemed much tamer and easier to enjoy around town. The Gladiator was less comfortable, but I’ll bet it would simmer down some if the spray-lined bed ($495) was mostly loaded.

Inside, you’ll be sure you’re in a Jeep with its round gauges and air vents and mostly flat straight dash and door panels. In fact, those doors give the Jeep a bit of a claustrophobic feel as opposed to other pickups where the door panels are more concave to give drivers and passengers more elbow room. I hit my elbow on the door several times while bouncing over rough southeast Wisconsin roads. 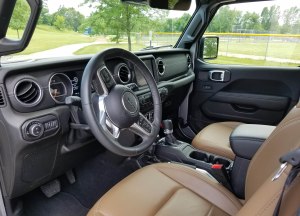 Everything looks and feels fine here though. The test Jeep was silver and the interior black and tan, the dash being black, the leather-trimmed seats tan with an Overland logo on the front seats, just below the headrests.

Overland, the third trim level of four, starting at Sport, includes a fine 7-inch display screen that was easy to adjust. Jeep and all of Fiat Chrysler’s vehicles seem to have figured out how to execute the infotainment system better than many other makes.

The Overland model also comes with heated power side mirrors, 18-inch wheels (up from 17 on Sport and Sport S), along with a theft prevention system, dual zone climate controls and a bunch of USB ports and plug-ins, plus all-terrain tires. So there’s a reasonable amount of civility to this trim level, even for the outdoorsy crowd. 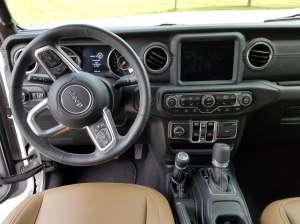 Yet the seats are manual as is the tilt-telescope steering wheel. In fact, there’s a pump lever on the driver’s seat to raise and lower it, plus a dial to adjust the lumbar support. And get this, there’s a strap to pull that adjusts the seat back angle. Seats themselves are mildly contoured and comfortable for around town to be sure.

Climbing aboard the Overland was aided by a running board, not standard on lower trim levels. But to ensure great ground clearance the board is just below the Jeep’s body. That creates a rather large first step to climb aboard the Jeep. It was a tough stretch for me at 5-5 and women may find boarding the Gladiator a bit unladylike in some circumstances. 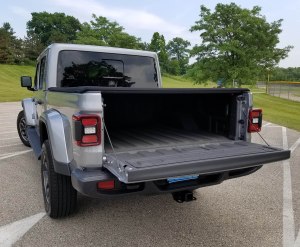 Goodies piled on here in addition to the nice automatic tranny, were mostly odds and ends to make the vehicle more plush, a bit of a contradiction for Jeeps. But the most fun was the convertible top running $2,295. A soft top is standard but this was a body-colored 3-piece that allows the owner to pop off roof panels up front to let in the sun. Think of it as a T-top for a Jeep, which calls it a Freedom Panel.

Whatever! But it works easily and is a feature that sets the Jeep apart from all other pickups.

The other big-ticket items were leather trim on the seats, wheel, etc. for $1,495 and the upgraded radio/infotainment system with Alpine stereo, HD radio and satellite radio for $1,595.

I was a bit surprised that it cost another $895 for the safety group including blind-spot and cross-traffic detection. That’s mostly standard on many lower priced vehicles. That package also added a park-alert system. Smart cruise control and forward collision warning adds another $795.

Apt for our northern climate was the $995 all-weather package that adds heated front seats and steering wheel.

A few other points of note, the Jeep key fob is huge and felt like I was carrying a small brick in my pocket, and a flat-bottom steering wheel would help ease a driver’s entry and exit by keeping knee-banging to a minimum. But on the positive side, a friend pointed out that the front turn signals were located on the fenders, not directly under the bright headlights. That makes it easier for oncoming traffic to discern whether the Jeep is about to turn or not. Bravo!

Then there’s gas mileage, which may be important, but really rarely is a standout on any pickup, save the diesel F-150 I drove a few weeks back. The test Gladiator managed 20.3 mpg in about an even mix of city and highway driving. That seems appropriate considering EPA numbers of 17 mpg city and 22 mpg highway.

But if you’re looking for an image-boosting mid-size pickup all that probably doesn’t matter much. You can climb aboard the Jeep Gladiator knowing you can haul a few bushes and top soil for the back yard and still go bang around off-road if you want … and you could even pop off the top to soak up some sun as you’re doing it.

Misses: Bouncy ride, tough climb up to running board, whiney transmission/tires, too much play in the steering wheel, wind noise from upright windshield, tight door to elbow room in cab, huge key fob and a flat-bottomed steering wheel is needed to ease entry and exit. Price a bit of a premium.

Made in: Toledo, Ohio