A line used by American Motors in marketing the Matador. AMC introduced a newly designed two-door coupe in 1974 as a luxury coupe. Members of the automotive press pretty much loved it. Car and Driver said, “There’s an undeniable smuggnes stamped on the fenders of AMC’s new Matador X. And each arrogant crease is integral to an overall air of confidence.” The X package, the sportiest, was one of three offered, the other two being the Broughram, and upscale Oleg Cassini. 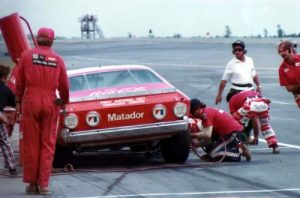 Besides basic marketing, additional awareness was generated by taking the Matador racing on the NASCAR circuit, prepped by Penske Racing and driven by Mark Donohue and Bobby Allison. It won in races at Riverside and Darlington twice and once at Darlington.

It played a staring role in The Man with The Golden Gun were Francisco Scaramanga and Nick Nack escaped James Bond in this Matador that became an airplane.

So what are they worth now?

Not a lot. The ones with the Cassini and later Barcelona trims along with the ones equipted with the 401 V8 mated to the 4-speed floor-mounted manual transmission are worth something. A search of the collector sites found one well-equiped 1974 California car priced at $14,000 but then jumped up to $22,995 for a 1977 with the Barcelona package. After that it got crazy!

This is a Matador!

Of course it was found on eBay where you could have this 1975 resto mod for just $149,995. This not a typo. Offered by Shelton Classics located in Moorsville, North Carolina with only 2,546 miles on it since the

build. But that alone is not what commands this type of cash. It has been completely gone through. One of the first things I noticed on the exterior was that those huge crappy bumpers were gone. Thank goodness because they really uglied up the car. 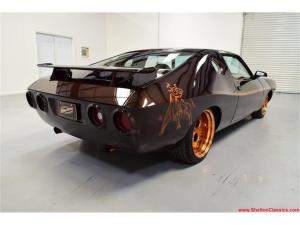 Painted in Dark Espresso Pearl it is complemted by the copper powder coated three-piece Rotiform wheels, staggered in size from front to rear. I like the stripe down the side along with the painted bull on the rear quarters. Similar to other resto mod projects, it has LED tail lights and halo-ring halogen headlights. The spoiler gives it a bit more attitude.

What would a kick-butt car be without a kick-butt sound system. A modern, multicolored LED-lit Pioneer stereo is installed in the dash, hooked up not only to the door speakers but also to an array of speakers and subwoofers in the package tray.

Cool so far but here’s where the AMC geeks like me might take a step back. Instead of tuning up an AMC V-8, like a 360 or 401, the engine has been replaced by a Chevrolet 502 cubic inch big block V8, hooked up to a four speed automatic Phoenix 700R4 transmission. This Matador will move as the engine has 500 horsepower and 500ft-lbs of torque.

While watching to car auctions I’ve seen resto mods come across the block. It’s a way to bring a classic car (not saying the Matador is), into this century from a design and technology standpoint, a clean sheet of paper. Some of the cars auction off for low six figure amounts but they are truely classics to begin with like Corvettes and Mustangs. Is this Matador worth $150K? That all depends on who wants it bad enough. In the description it reads,”If you’re looking to stand way out in a crowd, or have to have something absolutely no one else does, this Matador is everything you need!”