My dad, who worked there for almost three decades, brought home promotional items about the Javelin and AMX including promo models. Often he drove home the real deal that Tech Service had in the shop doing something on them. AMC got performance, the Javelins were winning in Trans-Am racing, Craig Breedlove set a bunch of records in an AMX, and the Hurst S/C Rambler was winning at the drag strip. But it was the AMX 2, and later the AMX 3, that captured my imagination. This car was cool no mater what manufacturer built it and 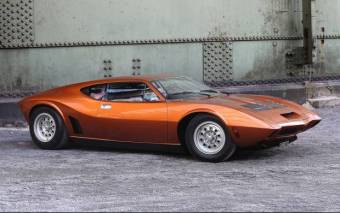 what’s amazing is that it still is. The restoration job on this AMX 3 was over the top with few if any parts available. The easiest was probably the 390 engine. I followed the competed cars after the program was cancelled and was sad that AMC never really had a chance to bring it to market wondering what might have been. Here’s an article in Hemmings that does a great job on the history of the car.