How can that be? You’re a car guy.

Well I’m also a huge airplane guy. I just spent five days in Oshkosh, WI at the Experimental Aircraft Association (EAA) as a volunteer helping kids discover radio control aviation. My daughter also volunteered with me this year. My passion for planes began when I was young. I wanted to be a pilot for Pan Am. Boy am I dating myself. But it wasn’t until I was in my 20’s that I did something, getting my private ticket. The Pan Am dream fell by the wayside, mostly because they went out of business, and two, I was happy flying Cessna 152’s and 172’s.

And if you think about it, cars are fast and airplanes are even faster. That means I like the jets but I also like the WWII era fighters and bombers. Many of them can move at a decent clip. In Oshkosh you see it all. AirVenture, which ended this past Sunday brings aviation enthusiasts from all over the world, more than 500,000. Of course there are cars there, Ford is a huge sponsor and had their new GT-40 on display. Outside there were some vintage Mustangs (the car), and right next to them are Roush Mustangs. Jack Roush is a pilot. Last year he crashed his corporate jet on final at EAA but everybody was OK. This year he created an Apollo themed Mustang for an auction to raise funds for EAA’s youth programs. 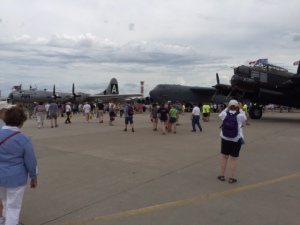 And here’s a great example. Parked on the ramp, left to right are a B-29, B-52, and British Lancaster bomber. The B-29 and Lancaster flew with P-51 Mustangs as part of the 70th Anniversary of the end of WWII. The B-29 named FIFI is the only flying example left in the world. The Lancaster was best know for its successes in the night bombing missions. The B-52 is the bomber that keeps on ticking. Celebrating its 60th year in service and the first time it ever landed at EAA. Here’s the video of it coming in. I walked around it and it is one BAP (Big Ass Plane). Then let’s contrast that with the 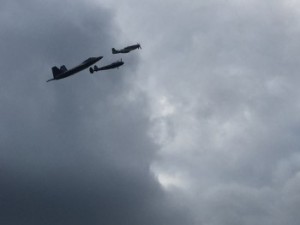 F-35 which also made its first appearance. Parked right next to it were two F-22 Raptors which performed an awesome performance. See it here. Make sure to turn your volume up, way up. And what was cooler than the F-35, P-38, and P-51 performing a Heritage Flight. Not something you see everyday. OK, one cooler thing, the night show held on Wednesday and Saturday nights. See what you missed.

Commercial airliners make a big splash at Oshkosh. In previous years the Concord flew in twice, Boeing showed off its Dreamliner last year, and this year it was Airbus’ new A350 XWB. Impressive in flight. I shot some but the stuff from the EAA is a lot better.

Besides looking at the big planes, my role as a volunteer was to have kids experience what it’s like to fly radio control aircraft. It’s fun meeting the kids and their parents from all over the world. I’m sharing these pictures because they are kind of cool.

One afternoon the Goodyear blimp flew near our flying space, I took control of the trainer plane from the kid and  set up the plane in a perfect photo op position. Relax, nowhere near the blimp. Click on the images for a better view.

What plane would I want? Well of course all of them but since I love to fly off the water, this A5 Icon, with a trailer, and Rover, ready to go had my name all over it.

Right now I’m going through EAA withdrawal and can’t wait until next year. Now back to the Velocity Channel to see all the car shows I missed.