As a kid in the 1960s we had a Plymouth Valiant convertible, a kissin’ cousin to the Dodge Dart, both pleasant, sturdy, reliable compact cars. 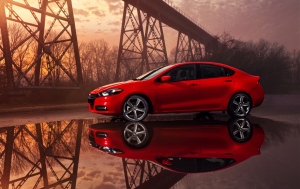 But by the 1970s, the Dart and Valiant had grown into ugly boxy things with parts that readily fell off. They, and other Dodge, Chrysler and Plymouth cars helped turn a lot of buyers off to Chrysler products. So much so that Chrysler has been climbing a steep hill much of the past 35-40 years toward respectability. That is, until now.

Now comes the new Dodge Dart, the first car jointly designed and produced by Chrysler and its financial rescuer, Fiat, the large Italian carmaker. That somewhat forced marriage of a few years back seems to have spurred a renaissance for Detroit’s former No. 3 carmaker. Respectability is growing.

Here’s why Dart, is a winner.

First, its name may mean something less than perfect to us Boomers, but to its intended younger audience it sounds fun, active and pretty darned hip, cool or whatever the word is these days. Dart’s pleasant exterior exudes youth, as does its stylish interior that on the tested Limited model features leather seats, a giant 8.4-inch infotainment screen and a leading edge thin-film transistor graphics dash gauge pod, standard on all models.

And while this is indeed an entry-level compact car (some might even call it mid-size at nearly 184 inches in length), it doesn’t look or feel like one. It has one-upped Chevrolet’s Cruze, which is a well mannered and attractive car in this segment.

How? Well, there are three basic trims, with three engines and transmissions and the car starts at $15,995 (SE) before working itself up to the Limited, with a base of $19,995. My Limited added a ton of extras to hit $25,560, but even that is a relative bargain, considering all the goodies that were included.

The Fiat turbo reportedly nets you good gas mileage, while also pushing the torque rating to 184 for added oomph. Plus, this model comes with a fine 6-speed manual transmission. Automatics are available, but Dart is more fun to drive. The third engine offering is a 2.4-liter 184-horse I4.

Acceleration is good to peppy, depending on how hard you press the gas pedal. In town when your revs aren’t too high there’s a little lag shifting into second and third gear. If you push the car a little harder and spool up the turbo as you shift it’s quite peppy. There seemed a slight turbo lag in the test car, especially in the lower gears, so keeping your revs up helps performance.

Dart feels light and solid at the same time, riding on the same platform as Fiat’s Alfa Romeo Giulietta. It weighs 3,186 pounds and is made just over the state line in Belvidere, Ill. For the record, the easy shifting (but long-throw) 6-speed manual comes from Italy.

Ride is excellent, the Dart riding on a 106.2-inch wheelbase. So bumps are spread out and the MacPherson struts and coil springs and gas shocks up front and multi-link suspension with similar springs and shocks in back create a well controlled ride. No jolts on potholes, just a slight bump and on you go. This suspension is set for a touring ride, which seemed dead on solid on Wisconsin’s crumbling roads.

Handling is relatively quick, with only a tad of wheel play. Put the car into a hard corner and it stays flat and even tempered. With more power the car could feel downright spirited. 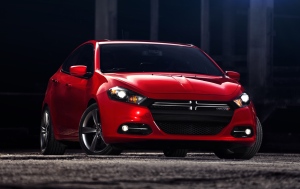 Braking is good too with four-wheel disc brakes, including ventilated units up front. ABS and traction control are standard, as is stability control, all state of the art.

Dart’s interior is stellar, at least in the Limited. But layout is the same in all models and that’s well thought out and presented.

The dark metallic gray (Maximum Steel) test car had a stylish two-tone leather interior, at least much of it was. The dash was gray over an ivory lower dash and included ivory leather seats trimmed in leather on the outer seat edge, and a cloth console side edge. I wouldn’t have noticed the difference except I touched the inner seat edge and felt the texture change.

Dodge also puts a dark gray leather hood over the dash gauges and adds stylish white and yellow stitching to set it off. The dash’s face is a black gloss finish that surrounds the gauges and large video screen, a matte black trim surrounds the radio and climate buttons. Satin chrome trims the air ducts, door release handles and large shifter knob.

The main gauges are a thin-film transistor graphics system that are easy to see and read and are reconfigurable so you can make them look as you’d like. This car didn’t have it, but there also is an optional light pipe surround for the instrument panel that I’ve seen and it looks great. In any case the controls and gauges are easy to see and the giant 8.4-inch media screen allows you to dial in your GPS, radio and other features easily. Everything was logical and worked well. 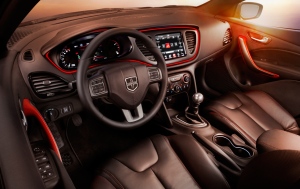 My one niggling complaint with the navigation system, part of Chrysler’s Uconnect package that adds $495, is that the zoom feature would let me select either a 1.2-mile or 0.8-mile range for the screen. At 1.2 miles not all the side streets would show up and at 0.8 the map was so detailed I couldn’t read the side street names. This hasn’t been a problem on any other nav system I’ve used. Usually the ¼- to ½-mile settings are perfect for city driving.

A great feature of the big screen though is that every time you start the car (push button), the screen lights up with control options, such as seat or steering wheel heat. Yes, at this price the Dart has both, two-level seat heat and a heated wheel. Those are part of an $895 option package that includes the leather seats. This is an excellent value.

Other useful goodies include blind-spot warning and a backup camera, which displays on the screen. The rain-sensing wipers and parking sensors are part of another option package worth $995, again a lot for the money and surprising to see on this level car.

Dart’s seats are sporty, well-contoured models with good side bolsters top and bottom. The driver’s seat was power adjusted with a power lumbar, while the passenger’s seat was manual, BUT the bottom seat cushion folds forward to give you some hidden storage space.

There is ample head and legroom front and rear, so the Dart will comfortably carry four adults. Those rear seats split and fold down too and trunk space is a reasonable 13.0 cubic feet.

A $495 Alpine stereo upgrade adds a subwoofer and 506-watt amp, so if music is your thing this also could be a worthy upgrade. You don’t need that much power just to tune in the talk radio crowd though.

Other than the map bugaboo, my only Dart demerit is a driver’s side visor clip that fell off when I unsnapped the visor. But it was quickly snapped into place and stayed put after that.

For an economical car like Dart, many buyers will be concerned about gas mileage too. Well, the EPA rates this model at 27 mpg city and 39 mpg highway. I got 28.6 mpg in a roughly 50/50 mix of city and highway driving, sometimes with a couple passengers.

All told, I think Dart must be considered a top candidate for my annual Zoomie awards presented in February. This is a fine car at a good price with oodles of options to make it any way you want, at any price you want.

One last thing, Dart is available in 14 colors. Not many cars offer that many choices.

Hop in the passenger seat and come for a ride.

Made in: Belvidere, Ill.