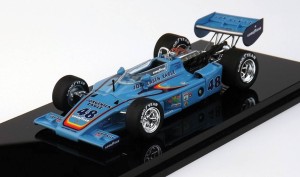 Dan Gurney remains one of the biggest names in open-wheel racing. His Eagle race cars dominated the Indianapolis 500 and Indycar circuit in the late 1960s through much of the 1970s, but really set the establishment on its ear starting in 1972.

That’s when Bobby Unser debuted the new Eagle with its giant rear spoiler and upped the speed ante to nearly 200 mph by putting his Olsonite Eagle on the pole at 195.8 mph, 3 mph faster than Peter Revson’s McLaren.

Replicarz, which previously released the 1973 STP Team’s Eagles of winner Gordon Johncock and teammate Swede Savage in 1/18 scale, now delivers three new Eagles in 1/43 scale. Back is the Johncock car, with just 200 being made, along with limited runs of 300 for both Unser’s white 1972 pole car and  1975 Indy winner, the blue Jorgensen Eagle..

Bobby Unser won Indy in 1968 in a Gurney Eagle, while Gurney himself was second. Gurney would place second and third the next two years, then retire. Yet his Eagles, made by All-American Racers in Santa Ana, Calif., soared. They won 51 Indycar races. 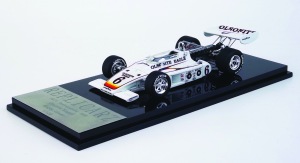 The Olsonite Eagle that Bobby Unser put on the pole in 1972 was the tipping point toward Eagles being the top Indycar of the time. That year it led the first 30 laps of the race before an ignition rotor failed sidelining Unser. He finished 30th. But by the next May, 21 of Indy’s 33 starters drove Eagles, including the winner, Johncock.

A McLaren, the other major player at the time, won the following year when 19 Eagles made the field, but Unser was back in the winner’s circle in 1975 with his blue No. 48. Eagles made up roughly half the Indy field. END_OF_DOCUMENT_TOKEN_TO_BE_REPLACED 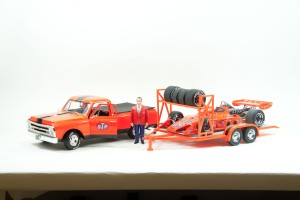 Collectors who like to create scenes for displaying their models will be thrilled by three new items from Replicarz, a 1968 Chevy C10 pickup and tandem race trailer, plus a figure of Andy Granatelli. All are sold separately, so you can create your own diorama to fit your display needs.

Best of all, these are all in STP trim, which means the shocking Day-Glo Orange that STP used on so many of its sponsored racers in the 1960s and 1970s. In fact, Replicarz has created at least four Indy Cars that fit the trailer and time period. There’s the new Paxton STP Turbine model, Mario Andretti’s 1969 Indy 500 winner along with the 1973 Eagles of winner Gordon Johncock and his teammate, Swede Savage.

Unlike today when race teams haul their cars and other equipment to racetracks across the country in giant semi-trailers that cost hundreds of thousands of dollars, in the 1960s and 1970s, many teams still used a pickup and trailer. Some even stuck with station wagons and trailers until about 1980. 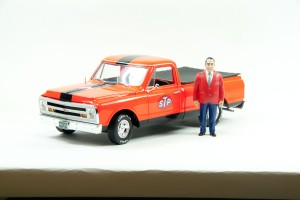 The Chevrolet C10 pickup was standard fare and would easily pull a tandem trailer and car from say, Indianapolis to Milwaukee, Wis., or Trenton, N.J. you could pile your tools and extra parts in the truck bed and put spare tires on the trailer’s front rack and be on your way. END_OF_DOCUMENT_TOKEN_TO_BE_REPLACED 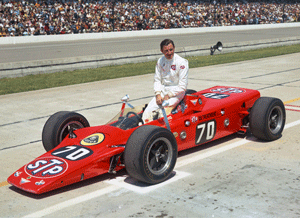 Mark and I get to drive some really cool cars but never the STP Lotus Type 56. An AutoWeek reporter did. Boy there’s not much we wouldn’t do to get a ride in that bad boy. I loved the STP turbines and Andy Granatelli. I am also a big fan of Parnelli Jones who came just a couple of laps shy of winning the 1967 Indy 500 had it not been for a $6 part. This really freaked out the Indy establishment that an engine with no pistons could win their race and slapped on some intake restrictions so it couldn’t do it again. That didn’t bother Granatelli who called on Colin Chapman to build the Type 56 Lotus, the car you see here. Unlike the ’67 turbine where the turbine sat next to Jones, the design had the turbine located behind the driver instead of next to him making the Lotus go faster.

You could drive it but….

You’d have to come up with at least a half a million bucks because that’s the neighborhood the gavel will drop at the Barrett-Jackson Auction January 17th in Scottsdale, AZ. Even if Mark and I both sold our homes and everything else we would still be short of the winning bid. Plus, if we did win it, we’d pretty much be sleeping by it in some storage shed. Bummer.

I was sitting in the packed main grandstand just shy of the pit exit for the flying start of the 1966 Indianapolis 500 when tires and suspension pieces and racer nosecones started exploding in the air. It was eerily similar to two years earlier, but without the fire and smoke, when I’d witnessed the most horrifying crash in Indy history. Thankfully, this time, no one was seriously injured.

But in the melee about a third of the starting field was eliminated, including favorites like A.J. Foyt, Dan Gurney and Don Branson. Yet a British rookie and Formula 1 champion, Graham Hill, picked his way through the carnage in his rear-engined Lola to run near the front all day. Favorite and 1965 Indy champ Jim Clark was setting a strong pace in his brilliant red STP Lotus, but he spun twice during the race, leading to folks saying that STP stands for Spinning Takes Practice. Hill snuck past Clark on one spin though, ultimately gaining the win after another F1 great, and Hill’s teammate, Jackie Stewart’s car failed with less than 10 laps remaining.

Racers were simpler and more delicate looking, yet beautiful, in the 1960s. Now Spark Model delivers a stellar version of the red and white American Red Ball Special that Hill drove to the 1966 Indy win, in 1:43 scale.

END_OF_DOCUMENT_TOKEN_TO_BE_REPLACED

The March chassis was dominant at the Indianapolis 500 in the early 1980s with track records falling regularly due to one guy in particular, Tom Sneva, the Gas Man.

A March won the Indianapolis 500 from 1983 through 1987, Sneva giving March its first Indy title and Al Unser Sr., its final at the Brickyard. In 1984 Sneva crushed the lap time and speed record in a bright white racer with blue and red stripes, the Texaco Star, sponsored by, well, you get it.

Now Replicarz has sent us its final production models of that pole car, which set the record at 210.029 mph, plus the Gordon Johncock-driven STP No. 20 March that qualified 5th and finished 25th after crashing halfway through the race.
We had seen pre-production versions of these racers earlier this year and these final versions are spectacular. END_OF_DOCUMENT_TOKEN_TO_BE_REPLACED

Editor’s Note: An earlier review I did on similar models was pre-production prototypes. These are the real deal and are on sale now from Replicarz.
Swede Savage was not a relative of mine, but as a teen in the 1970s I was a big fan, mainly because of the name and his association with AAR and Dan Gurney. But Swede was always quick and the blinding fluorescent red of his 1973 STP racer made pulling for Swede an easy task. He and long-time top-tier racer Gordon Johncock were teammates that year, creating an exciting duo, both with a good shot at winning the 1973 Indianapolis 500.Now Replicarz has nailed both the color and the giant-winged Eagle racers themselves. The No. 20 was driven to victory by two-time Indy champ Johncock, and No. 40 by his youthful teammate Savage.

Johncock’s ’73 winner was created a few years back by Carousel 1, and that was well executed, but Replicarz ups the ante. First, the color is much closer to the glaring red that STP used. Replicarz also updated the driver’s seat to make it matte white, creating a more realistic look along with the cars’ black-trimmed-in-white numbers, which are more true to the actual cars that raced in the tragic, rain-shortened 1973 Indy 500. 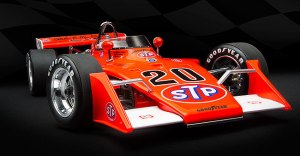 Brian Fothergill of Replicarz tells me that he and his design team have modeled the cars as closely as possible to the way they were raced. That means more logos than a car might have had during practice or qualifying. A web search turned up the 1973 winner and indeed, the decals match very closely. END_OF_DOCUMENT_TOKEN_TO_BE_REPLACED

While some of us old-timers remember front-engine roadsters at Indy, many more of us remember the variety of 1960s, ’70s and ’80s rear-engine racers, the Eagle, March, Foyt and Lotus chassis that won the Indianapolis 500 from 1965 forward.

Drivers like A.J. Foyt, Gordon Johncock, Mario Andretti and Rick Mears piloted these big-winged racers that took aerodynamics to a whole new level, and speeds along with them. Well, Replicarz now brings back some of these colorful Indy Cars, including two new versions that hadn’t been done previously. All are 1:18 scale and use molds that previously served to create the fine Carousel 1 models.Being released in May or early June are the STP team cars that Johncock and Swede Savage drove in the 1973 Indy 500 and the March that Johncock piloted in 1984.

I’ve got to admit that I’m a sucker for Indy cars, and already own a Carousel 1 version of Johncock’s 1973 Indy winner. But these raise the bar from those already well detailed models.

Here’s what I noticed different on the new Replicarz version of the ’73 Eagle. END_OF_DOCUMENT_TOKEN_TO_BE_REPLACED