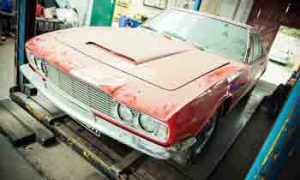 It’s fine admit it! Every time you go for a ride or a drive in rural areas, you pay special attention to barns or other buildings out in the middle of no where looking for that rare car you’ve always been wanting. So what if you opened the door and found not one but two identical cars? I’d be doing the happy dance! Add to that they are affordable and Aston Martins. That’s exactly what happened recently. If you want them, pack your bags because they are going to action. Here’s the rest of the story.

My regular blog followers already know this about me so for the first timers, I really like unusual cars. Maybe part of the reason I owned an AMC

Pacer. Stop laughing, I really did. Maybe that’s also why I like the Amphicar. So my aunt and uncle live on Kelly Lake, about 30 minutes west of Green Bay, and told me about this guy who had this car that was also a boat, or a boat which was also a car. Being in TV at the time, I called the guy, set up a time and off I went with a photographer.

It was the first and maybe the last amphibious automobile

Designed by by Hans Trippel and built in Germany, production started in 1961. The company set a goal of 20,000 units per year based on the then booming American leisure market. Hans make potential customers aware of the new car and in 1962 he got it. His Amphicar set sail across the often-turbulent English Channel from France to Britain. Slam dunk on this right? It naturally captured the attention of both car and boating enthusiasts all over the world. He got the U.S. market’s attention because around 3,000 units of the the 4,oo0 total produced were sold because of it.

Powered by a Triumph four-cylinder engine of 1147 cc, 8.0 compression ratio, rated at 38.3 bhp., used a Porsche gearbox, just over 14 feet long, five feet long, and had a 13 gallon gas tank. Guess you didn’t plan any long trips. In the water the owner used the steering wheel to turn the car instead of a rudder like you’d find on a boat. Compared to most boats or cars, its performance was modest. It got about 32 mpg on land and about 1.5 gallons per hour in the water.

How did it transition to water?

Basically it’s a boat with wheels hung on it. The hull is all sealed up, and the two doors have rubber seals around their edges that press against seals on the door frames when the doors are shut, they form a watertight seal. Once the doors are shut along with the hood and the bilge plug are both secured, you just drive down to the water’s edge, put the transmission in neutral, engage the dual propellers of the water drive with the smaller stick shift on the floor and off you go. Kind of freaky for first time riders. In fact former president LBJ owned an Amphicar and loved the reaction. That’s LBJ’s car on the left.

OK, why is it not made anymore?

A couple of reasons, one because it would leak, was made of steel so was prone to rust, noisy, and the profit margin on the car was too low. The west coast port-of-entry price in 1967 was only a little more than $3,000, twice the cost of a VW Beetle. Production ended in 1968.

An Amphibious Car Refuses to Sink into Oblivion

There are collector clubs and very devoted members. “United We Float, Divided We Sink” has been the motto of Amphicar enthusiasts for a long time. They seem to be a fun bunch. During the fourth week in July, Amphicar owners convene at Grand Lake St. Marys in western Ohio. These events, 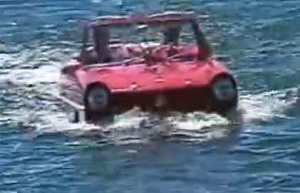 and similar ones nationwide, are called “swim-ins”. Pretty excited about this little car……yup, I see you shaking your head, yes? I went to Hemmings and found this ride. Love the seller’s opening line in the ad “Up for sail is a nicely sorted Amphicar. Runs and swims well”. While this one is priced at $55,000, the average price is around 32 grand. Nope, didn’t forget the video. Click on the image and come along for a ride or sail.

Your chance to dream big

I daydream a lot about “if money was no object” and I had a place to store them (like Jay Leno’s Garage) what five cars would I own. Of course I’d want more but in this blog entry decided to stick with five. So here you go.

I admit this is an emotional pick because I had one of these. It was my first entry into restoring cars and turned out to be a disaster. The engine blew up on me, there were holes in the floor pan and the back sail panels were mostly Bondo. I call it my $1,500 lesson. Ouch. But more on the car.

The AMX was built by American Motors from 1968-1970. Since it was a two-seater the only other car like it was the Corvette. This was one of AMC’s entries in the muscle car era although also classified sports car and touring car. It was available with a massive 390 V8 and one version pumped out and incredible 420 hp! I picked this year because I had one and it was the last and was built in small numbers, around 2,000 making it the most collectible of the AMX’s. A really good one right now would go for around 25 grand.

I love all Corvettes so it was tough to narrow it down to just one. I picked the ’63 because these are rare finds now since they only made them that one year. Legend has it that Corvette chief engineer Zora Arkus-Duntov never liked the split rear window because it blocked rear vision, but Bill Mitchell thought it to be a key part of the entire design. In the end Duntov won out and it was gone the next year. This was also the first year when they began designating them Sting Rays. According to Hagerty’s price guide, a split-window Z06 (big tank) with the 327cid/360hp F1 L84 will dent you for $335,000. But wait, money is no object, right?

This was the last year of the first-generation Cameros. Remember, Ford had already beaten Chevy to the gun with the Mustang. Chrysler and AMC also fielded entries. I picked the SS version because of the power option, an 8-cyl. 396cid/375hp 4bbl L89. Wheeee, that’s a lot of juice under the hood. Parts for 1967-69 Camaros are limited only by the restorer’s checkbook. But then again, who cares in this case. The one I would have is currently valued at 107 grand. This of course for your insurance.

Studebaker positioned this as “America’s Only 4 Passenger High-Performance Personal Car!”. It sure was. Equiped with it’s 289 cid/240 hp V8, it was a screamer. A Paxton supercharger was offered as an option and many of these Avantis went on to break Bonneville speed records. Twenty nine of them with the fastest with a Paxton almost 200 mph while a stock one 168 mph!

Maybe it’s because I like the underdogs I like this car but it’s bold new styling was not enough to save Studebaker as it shut down its South Bend, IN plant in 1963. I also like the rarity. The ’62 model had about 1,200 come off the line while the ’63 had slightly less than 4,600. With these low numbers I thought the Avanti would command a six figure price, instead found them around $20,000 (for insurance purposes) and the supercharged ones around $60,000.

I struggled for the last spot for a while because there are lots of cars I would have, if I could. This time I decided to hit it out of the park with one of the rarest of the rare Ferraris, a 275 GTB/4*S N.A.R.T. Spider, one of only ten made. This is not the same model that appeared in the movie Ferris Bueller’s Day Off. That was a 250 GT California. Why this? It’s a Ferrari and just recently set an auction world-record for a non-race car going for…wait for it…$27.5 in Los Angeles this past August!

I know there are lots of more expensive cars I could have put on the list but these are the cars I had an a certain coolness factor. What is your top five car list? Let’s start the discussion.

In the 60’s the space race was hot

Because of that the auto manufactures took cues from the space race whether it was in the design or the name. Ford is a good example, specifically their Galaxie. Yes the word is spelled Galaxy but maybe Ford didn’t want to just rip off the word. The Galaxie was a full-size car built in the United States by the Ford Motor Company for model years 1959 through 1974. It was the high volume counterpart to the Chevrolet Impala. Some Galaxies were high-performance, racing specification machines, hello muscle car era while others were plain family sedans.

Sales of the Galaxie convertible

It was a top down day at the beach

I had ridden my bike down to a local beach near my house to get my hair cut and what do I see but a red 67. Of course I grabbed the owner and here is his story.

No garage, no problem

So let’s say you don’t have around 30 grand to have something like this. The next best thing is a promotional model car. I wasn’t able to find a 1967 like this but I came pretty close with the 1965’s you see below. This car is in pretty good shape with the usual issues like the posts and was reasonably priced on eBay going for just over $42. So there you have it. The big one or the little one? If money were no object, which it very much is right now, I’d take the big one since I love convertibles! To see another of my blog entries on a model Galaxie, click here.

Hey Paul Daniel here. I help Mark with the site, do videos and write for the section of promo models. Like Mark, I’m a huge car geek! I was at Road American this past weekend, just about my most favorite place, with my wife and daughter, taking in some of the racing. Beyond the cool race cars, there are plenty others. This video will show you what I saw. So this video would actually fit better in a section “Cars I’ll Never Own”.