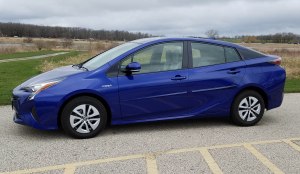 I laid a lot of praise on Kia’s new Niro hybrid recently, all deserved, but I was basing my hybrid comparison to the previous Toyota Prius. Now I’ve driven the 2017 Prius Two Eco and wow, this is a stellar hybrid.

Get this, I got 57.5 miles per gallon in a week’s drive. That includes plenty of city and two longish highway jaunts. But that’s just a number, and as the EPA says, your mileage may vary, although it rates this Eco version at 58 mpg city and 53 highway. Believe it!

Yet, if this were a tinny econobox that rode like a soapbox derby racer, well, most of us wouldn’t care so much about the mileage. We still need function and comfort, and Prius delivers.

First, note that there are nearly as many Prius models as there are pickup versions from most automakers. The Two Eco is the cost leader at $24,540, with a $865 delivery fee to end up at $25,405. There are five other trims of the four-door hatch model that, while slightly more streamlined than its earlier version, still remains dowdy looking. The exception are its stylish taillights.

Looks aside (and that’s where the Niro wins hands down), the new Prius is light and agile and so tightly built it feels as snug as a three-piece suit. There are no squeaks or jiggles. It’s as quiet inside as most entry-level luxury cars. The doors close with such a resounding thud as to need a little extra elbow grease to latch the doors, the seal is that tight.

And at just more than 3,000 lbs., the Prius Two is light, leading to nimble handling, good cornering and creating a relatively fun driving experience. END_OF_DOCUMENT_TOKEN_TO_BE_REPLACED