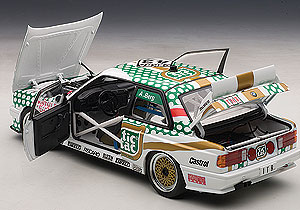 BMWs are racers at heart and BMW’s M Series are the hopped up versions of already racy coupes and sedans that the Bavarian automaker squeezes out of its German factories.

Naturally, Germans love to put their BMWs, Audis, Mercedes and Volkswagens to the test on the racetrack. So in the 1980s they began testing their home-country metal on road courses as part of the Deutsche Touring Masters Championship, popularly known as DTM. Think of it as German NASCAR.

Back in the late 1980s and early ‘90s BMW’s awesome M3 (first built in 1986) dominated the DTM series. The M3 was the souped up small coupe that sold well as the 3 Series in the U.S. market and was known as the E30 overseas. BMW sold hundreds of thousands of these, the original rear-drive 3 Series being made from 1982 to 1992.

That’s the timeframe Autoart focuses on with a variety of 1:18 diecast models, including the review car, a colorful green, white and gold Tic Tac-sponsored 1991 racer from Tauber Motorsports. That year the car was driven in many of the DTM’s 12-race season by Canadian Allen Berg, who had a varied racing career, including one year piloting a Formula 1 car. 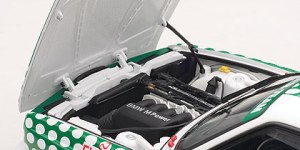 Berg and the No. 43 Tic Tac M3 Sport Evolution machine did not have great success that season, the 9th for DTM, but the car looks like a winner and was popular because of its unusual sponsorship and paint scheme. An M3 won DTM championships in 1987 and ‘89 by beating the likes of worthy competitors like the Audi V8 Quattro, Ford Sierra and Mercedes 190E. END_OF_DOCUMENT_TOKEN_TO_BE_REPLACED