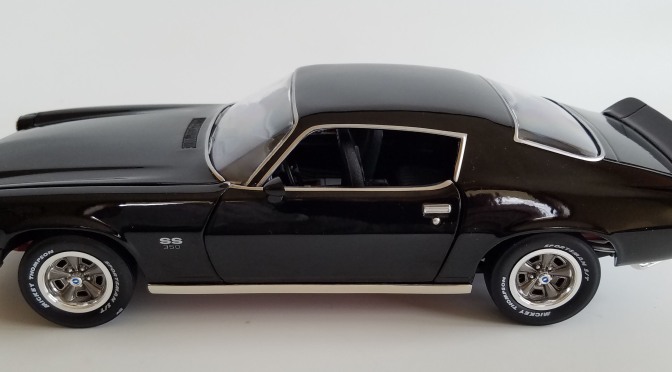 Fond memories of an early car follow many of us who grew up in the 1960s and 1970s and the second generation Camaro fills this category for me, and likely many others.

I loved the original Camaro’s shape, but the second gen was a smooth and sexy new look in the muscle car wars. The pointy snout with the two big headlights, smooth uncomplicated body lines and handsome four round taillights was a winner, and then down the road they were used as the International Race of Champions race cars. Bingo, loved it!

All that was plenty, but my first serious girlfriend’s dad had one that he loaned us for a date night. The car was as red as her hair, and I dare say we looked a spectacular couple heading to the show. While I should remember more, I mainly recall being able to bury the accelerator and squeal the tires, once we were out of dad’s earshot, and I made sure to take the highway that night so I could push the speed envelope. END_OF_DOCUMENT_TOKEN_TO_BE_REPLACED 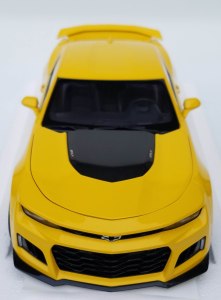 Seems like just yesterday it was 1971 and I was about to turn 16 and snag my driver’s license. My Uncle Wink, a car nut like me, was happy to help me learn to drive a stick, and believe it or not, he taught me on his rocket-fast 1968 Camaro, a pale yellow with the black nose stripe. I’ve loved Camaros ever since.

We spent many evenings in the gravel, yep, gravel parking lot of Butler University’s Fieldhouse in Indianapolis. Drop the clutch. Spin the tires. Throw some gravel. Uncle Wink would look a bit concerned, but ultimately laugh. I eventually got it right.

Now Autoart gets it very right with its latest 1/18 version of the newest rocket-like Camaro ZL1 and this time in a much brighter yellow than my uncle’s car. You can’t ignore this retina scorcher, and Autoart also rolls out a jazzy red, and bright blue model, along with more sedate white and black editions. END_OF_DOCUMENT_TOKEN_TO_BE_REPLACED

Chevrolet was in the sales driver’s seat in the 1960s as it churned out hit after hit as we were all busy seeing the U.S.A. in our Chevrolet.

But even then its cars were growing in size and stature so quickly that by 1964 Chevy realized it needed a more moderate sized model to compete with Ford’s Fairlane. Chevelle was Chevy’s answer, and it too was a resounding success.

Not only was Chevelle more modest in dimensions, it handled better and when Chevy started souping it up, quickly became one of the earliest muscle cars.

The past few years Auto World has created a variety of Chevelles due to their popularity, but now goes back to the first generation, built for model years 1964-’68. Again, Auto World creates a well-detailed 1:18 scale model at an attractive price, making this offering especially appealing to a wide audience of muscle car fans.

The Model: Auto World’s review model is the Tuxedo Black convertible version of the 1967 Chevelle SS, honoring the 50th anniversary of the first 396 Chevy V8. Can it really be that long? END_OF_DOCUMENT_TOKEN_TO_BE_REPLACED

My Uncle Wink had one of the original Camaros and that’s the car I learned on to drive a stick shift. Talk about spinning your tires and kicking up gravel!

But in 1970 Chevrolet launched its second generation Camaro and its looks, with those single headlights that blended into the front fenders and the split front bumper, along with its fastback styling, wowed us teens. At the same time Chevy was introducing the Vega, Camaro’s little brother, reflecting similar sporty lines.

So I’m always happy to see the 1970 pony car, as Camaro was known then, in any model or format. Thanks to Auto World, the Z28 version in its Galaxy Gray (dark metallic silver) paint scheme with black racing stripes slashing across the hood and trunk is ready to kick your die-cast collection up a few notches. Best yet, Auto World’s 1:18 American Muscle series delivers at a reasonable price, just $84.99 in this case. Heck, a lot of 1:43 models cost that now. END_OF_DOCUMENT_TOKEN_TO_BE_REPLACED