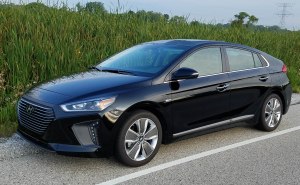 Hybrids are beginning to come in all shapes and sizes. Toyota’s Prius remains the dominant player, but like a college football player moving up to the NFL, the Prius’ will be facing stiffer competition.

Now comes Hyundai to the hybrid big leagues with its Ioniq. It’s oddly named and spelled, but everything else about it is big league. Its styling is more sophisticated than the dowdy Prius, but not quite as sporty as its sporty cousin, the Kia Niro.

Ioniq is a small hatchback, but it’s loaded with all the goodies you’d ever want, plus gets dynamite fuel economy. In fact, it boasts the highest fuel economy rating of any hybrid at 57 mpg city and 59 mpg highway in its entry-level, eco-minded Blue model. The Limited, two models up, is rated 55 mpg city and 54 mpg highway. I managed 45.2 mpg, while the trip computer insisted it was 53.4. All models have aluminum hoods and hatches to keep weight down and improve gas mileage.

For the record, I had gotten a still good, but less impressive, 35.6 mpg in my Niro test drive. Niro, which looks more like a crossover also is about 150 lbs. heavier than the Ioniq. Meanwhile, when I tested the Prius Two Eco earlier this year I got a stellar 57.5 mpg. That’s hard to beat.

Ioniq though handles nicely with generally light steering effort and good cornering because it has a low center of gravity. In Sport mode the steering firms a bit too. Plus Hyundai tells us the Ioniq has the best drag coefficient of any car on the U.S. market. That means it cuts through the air more easily, which aids fuel efficiency. Mind you the differences in drag coefficients among most cars is small. END_OF_DOCUMENT_TOKEN_TO_BE_REPLACED