Joe Leonard was a heck of a racer, on two wheels and four.

He not only won three motorcycle championships, the hard-nosed driver also moved up to Indy cars and won the 1971 USAC championship running virtually the same car as his teammate, Al Unser, who won the Indianapolis 500 in a sister car that year.

Replicarz honors Leonard, who died earlier this year, with its release of a 1/18-scale PJ Colt, a replica of the car Leonard drove to the USAC title decked out in its yellow and blue Samsonite-sponsored livery.  Replicarz had created a limited edition 1/43-scale model of the car previously, along with Unser’s 1970 and 1971 Indy winning Johnny Lightning racers. 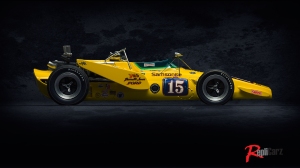 Leonard won three A.M.A. Grand National Championships between 1954 and 1957 and set a record with 27 wins. By 1961 though, he turned his attention to auto racing and debuted in USAC, then the top-level open-wheel racing series.  In 1964 he reached its top level, racing Champ cars, those that ran in the Indianapolis 500. He won his first race, the Milwaukee 150, in 1965 aboard a Gurney Eagle.

Leonard raced for several teams and had several good results at Indy, finishing third in 1967 and sixth in 1969 when he was wheeling Smokey Yunick’s doctored Gurney Eagle. In between he put Andy Granatelli’s famous wedge turbine on the pole at Indy and was leading with 9 laps to go when a part failed. END_OF_DOCUMENT_TOKEN_TO_BE_REPLACED

The mid-1960s were a wild and revolutionary time for race car design and technology at the Indianapolis 500, the predominant race in the world at the time.

The era saw roadsters with their engines in the front replaced by racers, such as Lotuses, with engines in the rear. There were a variety of engines from Offenhausers to Fords to Chevys, plus some jet turbines that darned near won, twice.

Then there was the sidecar roadster created by master mechanic and designer, Smokey Yunick, who had already taken on the stock car world at Daytona and entered several cars over the years at Indianapolis, including a 1962 roadster with a giant wing over the hood and driven by 1960 winner Jim Rathmann.

But by 1964, a pivotal and also disastrous year for Indy due to its worst and most terrifying crash that killed two drivers, Smokey had created what was commonly known as the sidecar racer, his Offset Roadster with sidecar. It carried his usual gold and black color scheme, and now Replicarz is creating it in 1/18 scale resin for us diecast collectors. END_OF_DOCUMENT_TOKEN_TO_BE_REPLACED