Even though I was only 9 in 1963…there, I blew the cover on my age, I still remember a lot about that year, the Kennedy assassination for sure. The Beatle’s U.S. TV concert, Route 66, and we had just moved from Madison to Milwaukee when dad got a job at….wait for it…American Motors. And to think he almost took the job at the chicken factory. It was also the year we had traded our 58 Rambler for the 63. It was white with a red interior. I’ve been looking for a promo car like that for a long time.

The 1963 Classic was the first all-new cars developed by AMC since 1956. Keeping the philosophy of the company,  they were more compact – shorter and narrower by one inch, as well as over two inches lower than the preceding models. Even though they were smaller, they lost none of their “family-sized” passenger room or luggage capacity featuring a longer 112-inch wheelbase. Now does that sound familiar today in cars? 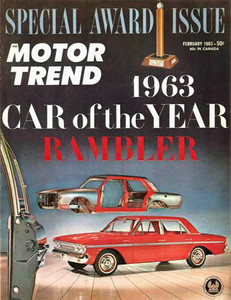 For the 1963 model year, the Rambler Classic line was completely redesigned with subtle body sculpturing. Outgoing design director, Edmund E. Anderson, shaped the Classic that was named Motor Trend magazine’s 1963 “Car of the Year.” These were also the first AMC models that were influenced by Richard A. Teague, the company’s new principal designer.

Throughout its life in the AMC model line-up, the Classic was the high-volume seller for the independent automaker. In 1963 mostly because of that car, many times the company was listed by some as part of the Big 4, outselling other brands such as Buick, Dodge, Mercury Chrysler, and Cadillac.

So here’s my 63 Rambler. Dad might have brought some home but most likely they were victims of car bombs 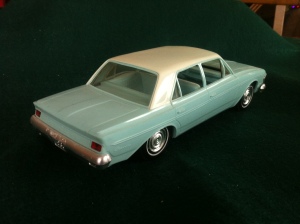 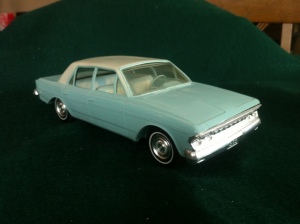 (firecrackers) or car fires, or ???? I bought this one at a car show. Not sure how much I paid for it but it wasn’t a lot. Maybe $50-$70. All the parts are on this one. There is some minor warping on the right front quarter panel and the bumpers could probably need a re-chroming but otherwise in pretty good shape. I’m still looking for the white body, red interior one. If you’re not an AMC geek like me it could be for an entire Car of the Year collection. Good luck on finding the other AMC COTY in a promo model. It was the Renault Alliance.

Like any car guy I subscribe to a lot of newsletters. I like to keep up on what’s new, what’s cool, what’s fast:), and collector cars, mostly from the the 60’s and 70’s. This week I received my AutoWeek newsletter, parused it, and low and behold came across this car. Now of course being an AMC geek I took a closer look at the ’64 Classic 770 Cross Country wagon. Since it usually was cash-strapped, AMC knew the could not go head to head with GM, Ford, and Chrysler so they found a segment the Big Three weren’t in. BTW, did you know that in 1962, Rambler was N0. 1 in station wagon sales?

This ’64 was built on the new Classic, which debuted in 1963, and was named the Motor Trend Car of The Year. The new Classic/Ambassador series was the third all-new Rambler and the second of true midsize proportions.  AMC stretched the standard wheelbase from 108 inches to 112 inches, while reducing overall length by almost an inch making for a lower, more modern profile. The wagon accounted for 34 percent of Classic sales. As a point of reference, the Audi A4 rides on a 110 wheelbase while the Cadillac CTS rides on 113 inch wheelbases.

Like a lot of AMC cars it featured lots of innovations such as curved side glass, an industry first for any car outside the luxury class which contributed to a sophisticated look that was supposed to last a decade. “Uniside” construction, which reduced body stampings by 30 percent. Door openings were welded from two stampings rather than 52. All of this reduced the weight as much as 150 pounds for some models. Dual-circuit brakes, soon required on all cars, were carried over from ’62. In my research for this article, besides the ad on the left, I was able to find a radio spot done by Phyllis Diller. She sounds so young.

In the AutoWeek article by John F. Katz on 10/08/2012, he says the example above belongs to Bruce Ritchie, the second owner, “despite 72,000 original miles, seems to have time-warped directly from the Atlantic City showroom where it was sold brand-new. Look past the rocket-age instrument panel, and you see an interior that’s well-appointed and more upmarket in appearance than almost any contemporary midsize car. The seats are flat and soft, and the steering wheel large and close, but those quirks belong as much to the time as to this particular vehicle. The 196-cid, 127-hp overhead-valve six idles in silence and accelerates with a happy thrum. The steering is predictably linear, while the soft all-coil suspension convincingly replicates the ride (and body roll) of a much larger car. But that was precisely the Rambler’s appeal: big-car comfort and style at 23 mpg.” according to Katz.

While this is not a hot collectible, it is affordable. The car’s original list price was $3,233 and examples like this will go for around $7,900. Best of all, parts are available, and all one has to do is join one of the collector clubs, like the American Motors Owners Association, to find out where they are.

So here’s my promo model, a two-tone, white over maroon. I’ve had this car for a very long time as you can see by the dust on it. I’m not sure if it was one my dad brought home when he worked at AMC or I bought it at a swap. I do remember seeing these at swap meets. Examples of good ones like mine go for around $50. I was only able to see one on eBay and the current bid was around $35. I did see a ’63 Classic Sedan with a current bid of $90. I have one of them too. A few years back, my dad and I were at the American Motors Owners Association event in Kenosha, where most of the AMC’s were built, and there were some vendors selling the promo models. I was talking to a couple of guys, one who was into collecting promo models year by year and all the colors they came in while the other was collecting just the wagons which I have. Thinking back now to when I was kid, dad brought some many promo models home, many free while some others he paid 2 bucks for, 2 bucks! Quite a few of those were either burned or blown up in my driveway.

Have you ever wondered why a certain car didn’t meet expectations and became just a footnote? Such is the case for American Motors’s Marlin. This “Man Size Fastback” as AMC called it in ads was not the original concept.  Designed by AMC’s famous designer Dick Teague chose the Rambler American chassis (106 inches) and created the Tarpon in 1964 hoping to fend off the soon to come Ford Mustang. Remember, Ford made the Mustang off the Falcon chassis. END_OF_DOCUMENT_TOKEN_TO_BE_REPLACED