Olds’ Cutlass 442 was a beautiful beast …

One of the cars I learned to drive on was our family’s 1969 Oldsmobile Cutlass S – no power steering and a big throbbing V8 under its long hood. The car was a beast, but beautiful dressed in its Aztec Gold paint scheme.

For that matter, the Cutlass was one of the best-looking muscle cars of the late 1960s and early ‘70s, pacing the Indianapolis 500 three times between 1970 and ’74. (Remember the Hurst Shifter girl? You know you do!)

So when Auto World announced it would reproduce the 1968 442 W-30 model it made a lot of sense. Thank goodness they did their 1/18 scale die-cast model in a beautiful deep gold, known officially at the time as Cinnamon Bronze, with white 442 accent stripe and white interior. Sharp!

For 1968 the 442 was its own model, but it had begun back in 1964 as a $285 option package on both the F-85 and Cutlass models. Originally it was listed as the 4-4-2 package because it referred to adding a four-barrel carburetor, four-speed manual transmission and dual exhausts. Clever! 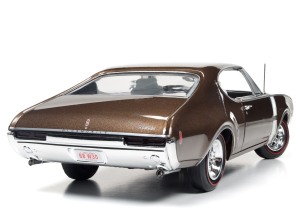 It was a response to crafty Pontiac pumping the performance of its LeMans model, a cousin to the intermediate-sized Olds F-85. Pontiac dubbed it the GTO, and the rest is history. END_OF_DOCUMENT_TOKEN_TO_BE_REPLACED

Unfortunately after next month there will no longer be anymore built after Ford closes the doors on its plant following the lead from GM who shut down its Holden plants. At one time this was a booming market cranking out just over 400,000 vehicles in 2004 but it dwindled down to 175,000 in 2009. Why did all they pull out? Mostly political tax stuff that I’m not going to get into here.

Holden manufacturing dates back to 1856. They were the first to introduce the “ute” and Australians ate it up. It became a huge market. It may have also inspired the El Camino and Ranchero built by Chevy and Ford in their U.S. Plants. See my blog entry, history of the El Camino and Australian “utes”. The Holdens, in my opinion, are the fastest and best looking cars produced in Australia. In 1925, Ford Australia’s first products were, of course, Model Ts assembled from knock-down kits. Ford is best known in Australia for the Falcon, not the same as the one produced here in the U.S. Chrysler also played in the Australian market but only stuck around for a much shorter time. END_OF_DOCUMENT_TOKEN_TO_BE_REPLACED

Songs about the GTO

I love cars! I love music about cars too which might be the reason I like the Pontiac GTO so much. Overall there are over 15 songs about this car mostly in 1964, the first year the GTO was built. Songs range from Little GTO by Ronny and the Daytonas, to Mighty GTO by Jan and Dean, to Here comes the Judge by Shorty Long. I have several on my iPhone.

History of the GTO 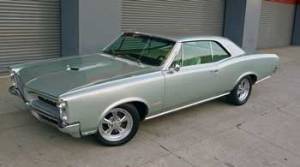 Built from ’64-’74 and then again by Holden from ’04-’06, It was a classic muscle car of the ’60’s and ’70’s and considered by some to have started the trend with all the big four automakers offering a variety of competing models. The GTO was the brainchild of engine specialist Russell Gee, Bill Collins, a chassis engineer, and Pontiac chief engineer John DeLorean. GM had a ban on sponsored racing on tracks and events at the time so these guys took it to the street. DeLorean came up with the name idea inspired by the Ferrari 250 GTO. Good luck on trying to find one of those now! GTO is an Italian abbreviation for Gran Turismo Omologato, in english “Grand Tourer Homologated”, which means officially certified for racing in the Grand-Tourer class. The Ferrari guys were not to happy about it. Go figure.

Consumers began calling the GTO ”The Goat,” because the animal is known for eating anything in this case on the street. Acronym for GOAT was turned into “Gas Oil And Tire” burner. Those who had a GTO probably spent time and money purposely burning the three resources, and with gas costing only 32 cents a gallon, who cared.

Promo model GTO’s can be a bit pricey too.

While you won’t be dropping the kind of cash I mentioned above, good GTO promo model examples will cost a couple of hundred dollars. I found this hard to find MPC ’71 Quezal Gold Hardtop which sold for $245. While this MPC ’70 Cardinal Red GTO Hardtop sold for $245. Sure you can find lower cost ones for around $20 but there is nothing like having a pristine model of one car that inspired so many songs. 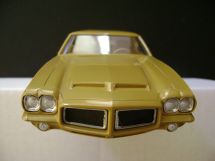 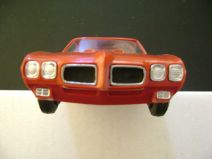 Muscle and detail in 1:64 scale? Yes, from Auto World

Hats off to Round 2 and its Auto World line of TRUE 1:64 scale cars, both muscle cars and newer models, all offered at modest prices for collectors to augment their collections.

These are new tools and Auto World is taking a unique strategy with 1960s muscle cars and other classics, plus some of those classics’ newer counterparts. It is offering 1:64 scale cars with better detail than in the Hot Wheels and Matchbox cars that flood the market. Yet these cars come in at three attractive price points, $2.99, $5.99 and $6.99.

The TRUE lineup includes cars with accurately scaled wheels and tires, even at the $2.99 entry point. These have die-cast bodies, but plastic chassis with free-rolling hard wheels. All are nicely displayed and sold on blister cards. Detailing is good with painted head and taillights and logos, plus accurate hood and air scoops, such as on the 2013 Chevrolet Camaro ZL1 Convertible and 1984 Camaro Z28 samples we got. END_OF_DOCUMENT_TOKEN_TO_BE_REPLACED