It’s the biggest MINI yet. I know that sounds contradictory for the small British-born make now made by BMW. But it’s true. This is MINI’s version of a crossover or small sport-ute with a longer and wider body, plus ALL4, its all-wheel-drive system is available.

It also appears to be less MINI in styling as it looks more bulky than cute. Think of that cute guy/girl in high school that packed on a few pounds by the 10-year reunion. In fact, the Countryman is just short of 500 lbs. heavier than the MINI Clubman that I enjoyed last year.

To put it nicely, the Countryman feels more substantial than earlier models and obviously is designed to accommodate larger U.S. passengers. The Countryman gains four inches of rear seat legroom compared to its predecessor and being a 4-door it’s easy to load five people aboard. I did it on a lunch run and one of the riders was a 6-footer.

So while the MINI-ness of the Countryman seems a bit of a stretch (pun intended), the usefulness of it should make it more attractive to folks who intend to actually haul a family in it on a trip. Another family plus? The rear seats fold down flat in a 40/20/40 split to expand the generous 17.6 cubic feet of cargo space, but allow rear seat riders. Likewise the seats will recline slightly and the entire rear seat will slide forward a couple inches if you’re simply carrying cargo, not rear seat passengers. END_OF_DOCUMENT_TOKEN_TO_BE_REPLACED 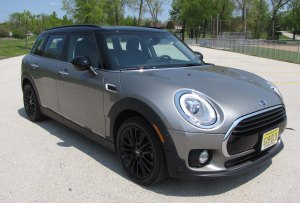 When does a MINI become so big that it’s not, well, mini?

There’s a fine line to be sure, but the new MINI Cooper Clubman seems to straddle it pretty well. Visually the Clubman is still cute with the round headlights and profile of a MINI, but there’s no doubt it’s longer and, to be honest, more useful than its predecessor.

The new Clubman is roughly 12 inches longer than the former model with a wheelbase that’s five inches longer. The upshot is more rear seat room, decent cargo space with the rear seats folded down, and a smoother ride. There are four doors too, making it easier for folks to slide into the rear seat. The former model had just one rear-open back side door, making seat access a bit clumsy.

Like before, the Clubman keeps its rear panel truck-style doors, which allows for easier loading and unloading. Plus it means wider loads will slide out easily.

All that increases usefulness.