Striking Viper GTS-R ACR is a ‘super’ car, in scale … 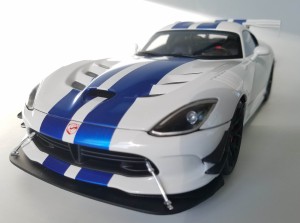 I consider myself lucky that as part of my gig of driving and reviewing new cars for newspapers and websites I’ve crushed the gas pedal on several Dodge Vipers, but not the Viper GTS-R ACR. That’s the racy version that put the cap on the Viper run from 1991 to 2017, not all inclusive.

That’s right, whether you remember or not, Viper took a few years off as sales lagged and insurance companies questioned their wisdom of covering these rocket sleds being driven on public roads.

I can tell you the various V10 engines that Dodge packed under Viper’s long muscular hood were all among the most powerful cars I’ve ever driven, some new Hellcats being the most recent exceptions. The Viper was a beast! END_OF_DOCUMENT_TOKEN_TO_BE_REPLACED