You can’t get any rarer than a one and only model, a one and done.

In this case, Auto World has reproduced what experts say is the ONLY 1967 Chevrolet impala SS with a 427 cu.in. L-72 V8 under the hood as original equipment.

The rare, make that one-of-a-kind, Impala hardtop is owned by Bill Wickman and graced the September 2012 cover of Hemmings Muscle Machines magazine. Now it’s a 1:18 knockout from Auto World. Here’s the scoop!

In 2011 the Muscle Car And Corvette Nationals scored this unusual Impala at 992 of a perfect 1,000 points, which led to the gorgeous emerald turquoise SS ending up on the Muscle Machines cover. 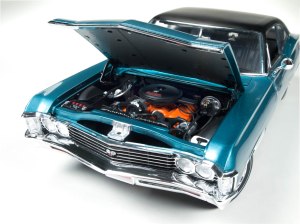 Experts at the show say there’s no record of any 1967 SS models being equipped with the mighty 427 V8 that created a whopping 425 horsepower. The big block Chevy engine was introduced in 1966 and the L71 version used in Corvettes. END_OF_DOCUMENT_TOKEN_TO_BE_REPLACED