Streamlined CC Sport shows what VW can do

When Volkswagen launched its sporty CC in 2009 it went head-to-head with its own Passat, at the time a dowdy midsize sedan that was in need of a restyling. 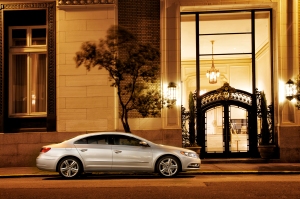 Now, Passat is coming off a facelift last year to thin it’s body to blend more with the other mid-size sedans that sell well, Toyota’s Camry, Honda’s Accord, Ford’s Fusion and Chevrolet’s Malibu. So the CC, which VW calls a coupe, but is indeed a midsize sport sedan, stands out as a distinct step up from Passat, if performance and looks tickle your lederhosen.

CC is sleek with a swept-back rear window and trunk lid giving the car a coupe-like appearance, despite its four doors. Its profile is low and lean, so low in fact that I could stand with my arm resting on its roof and not even strain a tendon. Not many cars are this streamlined looking and the CC actually is more exciting looking in person than in even VW’s press photos. END_OF_DOCUMENT_TOKEN_TO_BE_REPLACED