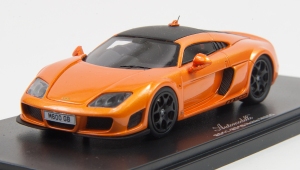 The Noble M600 may be the fastest car you’ve never heard of, and no wonder in the U.S. market because it’s not readily available here.

Nope, Noble is a British supercar made outside Leiscester, England, where it sells for 200,000 pounds. How much that translates into U.S. dollars after the Brexit vote may require a phone call to your local banker .

But Automodello’s new 1/43 scale version is a modest, considering the original’s price tag, $119.95. And we shouldn’t be surprised that Automodello takes on the Noble for a model as it has been mining models of some of the lesser known makes and rare vintage cars and racers that other die-cast and resin model maker have steered clear of. For the record, this is Automodello’s first model of a currently produced car and away from its vintage lineup.

Noble Automotive was founded in 1999 by Lee Noble who wanted to build his own high-performance mid-engine, rear-drive car. What many of us call a driver’s car. 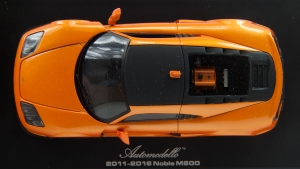 END_OF_DOCUMENT_TOKEN_TO_BE_REPLACED

Well, consider that you probably didn’t know that Porsche ever raced Formula 1, and won. Consider too that only four of these cars were ever made.

Thanks to Autoart, that number is now growing, of course these are 1:18 scale diecast, so not quite as fast, or as dangerous as the originals.

A little background
In the early 1960s, the racing world, led by Formula 1 in Europe, was transitioning from front-engine to rear-engine cars. Porsche joined Ferrari, Lotus and others in developing new chassis and engines to show off their design capabilities.

Porsche was only in it for a short time, with moderate success in 1961 with its 718 and 787 models. But in 1962 Porsche created the slim 804 racer that won Porsche its one and only F1 race, the French Grand Prix at Rouen. American Dan Gurney drove the car, beating Tony Maggs’ Cooper by a lap. Gurney also won the non-points Solitude Grand Prix shortly thereafter.

This is Autoart’s version of that racer’s sister car, as driven by Joakin (Jo) Bonnier at Germany’s Nurburgring later that summer. The Gurney car also is available from Autoart, and both models also are available with driver figures. END_OF_DOCUMENT_TOKEN_TO_BE_REPLACED