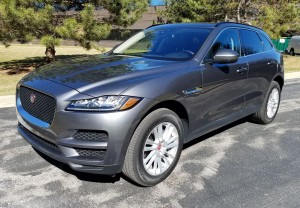 Jaguar has its first sport-utility truck, the F-Pace and it’s already its best-selling vehicle. That tells you a lot.

Jaguar smartly delivers three engine choices in its new ute. The same 3.0-liter supercharged V6 as in last week’s Jaguar XE sedan will likely be the main choice of buyers. It cranks a healthy 340 horsepower with 332 lb.-ft. of torque, but drinks premium fuel and gets just 18 miles per gallon city and 23 mpg highway.

The dark metallic gray test truck went the other way, packing an Ingenium 2.0-liter I4 turbo diesel under the F-Pace’s muscular hood that even includes a mild hood bulge. The diesel features 180 horsepower and a grunt-rich 318 lb.-ft. of torque. 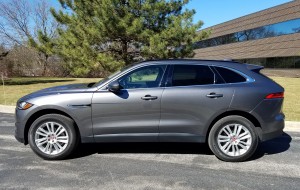 Fuel mileage is impressive. The diesel is rated 26 mpg city and 33 highway. I got 27.7 mpg in driving that was heavier on city driving this time. There also is a stop-start feature here to save fuel, but it can be turned off, which makes sense from a smoothness of operation standpoint once the truck’s engine is warmed. END_OF_DOCUMENT_TOKEN_TO_BE_REPLACED

Mark and I would have loved to have made the trip to Geneva. Plenty of  announcements, like the 2016 Nissan Juke. Don’t get all excited here because it still looks weird. Read more here.

Maserati unveiled the Alfieri, a 2+2 concept car, a 100% functional prototype that says much about the design DNA of future Maseratis. I think this looks so much better than what Maserati has out now but still like a lot of other cars.

McLarens on the other had have a look all to themselves. I got to sit in one at the Chicago Auto Show. Introduced at Geneva is an open-top 650S joining the 650S coupe. Boy would I love to have one of these.

Jaguar confirmed the name of their all-new sports sedan coming to the U.S. in 2016, the XE. Another car on my list I would love to own simply because it’s a Jag.

Last but not least is Jeeps new entry into the small SUV segment, the Renegade. Great name from the past and I hope it lives up to it. I really like the styling but will wait to give it my blessing until I have a chance to drive one. This will be the first Jeep not built in Toledo or Detroit since the hookup with Fiat. The final assembly location for the Renegade will be at the Melfi Assembly Plant located in Italy built off a Fiat platform. We’ll see.