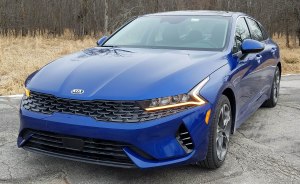 I’m not sure what else a buyer could want from a stylish family sedan beyond what Kia’s K5 offers, unless they wanted to pay much more.

I know, I know, mention value in a car review and the reader yawns and wants to click on an extended warranty ad. Stop right there. Don’t do it!

Kia’s K5 replaces its attractive Optima sedan and is a sedan par excellence, in appearance, performance and price.

First, give it a serious look. END_OF_DOCUMENT_TOKEN_TO_BE_REPLACED

Beauty goes to the bone with Lexus LC 500h …

Beauty should be more than skin deep when a car crosses the $100 grand threshold and beauty goes clear to the bone with the Lexus LC 500h. This is the hybrid version of the luxury car maker’s grand tourer (GT).

I’d tested the V8 powered 2+2 screamer during the summer and was wowed by its looks, power, handling and interior design and comfort. All the good stuff remains. In fact, not much is different in this hybrid version, save the hybrid system itself and the fact it’s mated to a 3.5-liter V6. END_OF_DOCUMENT_TOKEN_TO_BE_REPLACED 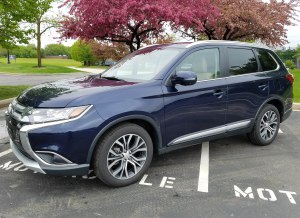 Mitsubishi is the quiet company in the U.S. auto market; we hardly hear a peep out of the Japanese vehicle maker. Its lineup is compact and advertising minimal.

But the star of its lineup for several years has been the Outlander, a competent crossover with available AWD and a standard third row seat. That’s certainly something to tout to families looking for inexpensive wheels and the ability to carry 7 passengers. END_OF_DOCUMENT_TOKEN_TO_BE_REPLACED

While theaters are bulging with “Star Wars,” auto dealer showrooms are embroiled in car wars as top-selling mid-size sedans butt heads with their latest models. END_OF_DOCUMENT_TOKEN_TO_BE_REPLACED

Outlander Sport still under the radar … 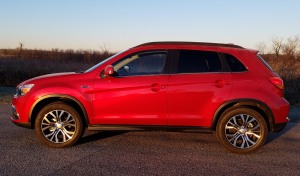 Mitsubishi continues to fly under the radar among the Japanese car makers in the U.S., with just a few models and those don’t change often.

But the Outlander Sport has been one of its success stories, as it spun off from the larger Outlander SUV a few years back. This is a small ute, or crossover, about a foot shorter in length than Outlander.

It’s handsome, easy to maneuver in a parking lot and an automotive bargain. But it’s no benchmark to be sure.

The body is tidy and looks a bit sportier than many mainline small utes. I tested a pretty metallic red almost top-level SEL with AWD. The later is a bit of a misnomer in that you must engage the 4-wheel-drive system while cars and wagons such as Subarus are AWD all the time. Still, that’s easy because there’s a big button on the console. Press it once and you go from 2WD to 4WD.

Price though is what sets it apart. You can easily pay $30-35 grand for a decent AWD crossover or small ute, but the SEL model starts at $26,835, including delivery. Even with its pricey Touring Package, a $2,000 option, the test vehicle checked in at just $29,110. That’s a certifiable bargain.

That AWD works fine once engaged, and the Outlander Sport SEL now comes with a bit horsier 2.4-liter I4 engine. This one has 168 horsepower compared with 148 in earlier models and lower cost trim levels. END_OF_DOCUMENT_TOKEN_TO_BE_REPLACED

Some cars are rolling art right from the get go. Such is Aston Martin’s Vanquish, which was introduced in 2013 to coincide with the British luxury car maker’s 100th anniversary.

As with all Astons, the goal was to combine beauty and performance on four wheels.

Likewise Autoart has recreated that beauty in 1/18 scale with its composite-bodied Vanquish, in sparkling black for the review model. Other colors are available, but bathed in black this baby looks long, lean, and sexy, just like the real beast.

Vanquish, like most high-priced luxury makes, was aimed at the uncompromising buyer. But not the one who demands only luxury, or beauty.

Vanquish, as its name suggests, wants to smite its automotive foes that are competing for the high-end coin of the realm.

A 2017 Vanquish lists at $287,650 for the coupe (like the review car) and $305,650 for the convertible.  Under its long carbon fiber hood is a throbbing V12 that makes 568 horsepower, the most of any power plant in Aston Martin’s history. END_OF_DOCUMENT_TOKEN_TO_BE_REPLACED

Move over Camry, Accord, the new Mazda6 is a gem

After all these years reviewing cars (30+) I find it hard to understand why Mazda doesn’t sell a lot more cars.

Its midsize Mazda6 is another gem that is sporty looking, handles well, provides a comfortable ride with good power and delivers extremely good fuel economy. Sounds like a lot of checkmarks in the average buyer’s “want” boxes.

Yet Toyota’s Camry and Honda’s Accord, among others, outsell the Mazda6 regularly, and have for years. Could it just be buying habits that work against other sedans that easily challenge those top dogs? Could be. But if you’re looking for a midsize family car with more pizazz, then the Mazda6 should be dead center on your radar.

I drove a sharp looking Blue Reflex (light silvery blue) Grand Touring model. That’s top of the line, so it’s loaded with standard equipment, leather seats, etc., plus this one added the $2,180 GT technology package, a cargo mat and door sill trim plates to push a $30,195 base price up to $33,395, including an $820 delivery fee. That’s almost exactly the average selling price for a new vehicle these days.

Here’s what you get and how it drives. END_OF_DOCUMENT_TOKEN_TO_BE_REPLACED

Fifty years in and Mustang is still behaving like a teenager with his first set of wheels and looking as sexy as ever.

The previous sizzling Mustang design was so reminiscent of the 1960s icon that some felt Ford had taken a step back, just to glom on to sales from us Baby Boomers. So what? But the 2015 model keeps Mustang’s styling heritage, a long hood, fastback styling a pony on the grille and tri-bar taillights. Wisely it also kept Mustang’s long-popular profile.

But indeed Mustang looks leaner and sleeker now from the front, a bit more youthful with its smoother sides. In back I like the way its tri-bar lights lean forward, but its rump has been broadened visually with accentuated wheel flares, shades of J Lo! The bet is the overall effect will still appeal to Boomers, but will increasingly lure younger buyers. Works with the Kardashians! 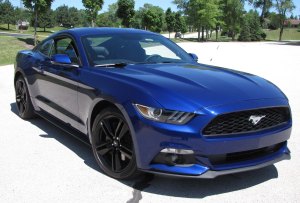 Looks may go a long way to broaden interest in the Mustang. The car is gorgeous, but its refinement also makes it less rough around the edges and that will help too. The big upgrade starts with a fully independent rear suspension, something racers and enthusiasts have been calling for to replace its older live rear axle. While Ford had gone a long way to perfect the live-axle’s ride, this is better. END_OF_DOCUMENT_TOKEN_TO_BE_REPLACED

Rare counts for a lot in the real, that is 1:1, vintage car world, and it’s making its mark in the diecast car market too.

CMC, the premier high-end diecast car model maker has made a habit of creating beautiful 1:18 models of rare race cars and elegant 1930s automotive style icons. The cost is up there, but so is the detail. You almost expect these models to start and drive off your desk or display shelf.

So it’s not surprising that CMC has chosen the rare 1961 Aston Martin DB4 GT Zagato as its latest artistic endeavor, and in sumptuous Aston Martin racing green. For the record, the rare Zagato, which is the lightened version meant for racing, consists of 1,825 parts of which 1,394 are metal. 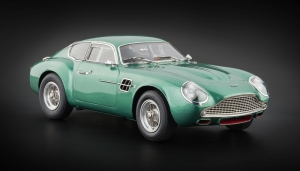 Only 19 Aston Zagato models were made over a 2 ½-year period from late 1960 into 1963. All were custom-made and designed by Gianni Zagato and featuring soft curves, which became popular in the 1960s on high-end cars like Astons, Jaguars and Ferraris.

At the time, Aston was trying to beat Ferrari’s 250 GT in sports car and endurance racing, so it made sense to go with a lightweight body made of thin aluminum plates and featuring minimal amenities in an effort to cut weight and increase performance. Riding on a short, 93-inch, wheelbase and weighing just 2,701 lbs., the DB4 was just 168 inches long. That’s about the same length as today’s Nissan Z350, but the Nissan is roughly 400 lbs. heavier. END_OF_DOCUMENT_TOKEN_TO_BE_REPLACED

Sporty, high-value Dart GT has power, but ride is too sporty

My previous test of the compact Dodge Dart was near perfect. That was the Limited model, this metallic red beauty was the sportier GT.

Blame it on age or our increasingly decrepit roads, but this one was harder on the derriere.

Oh, I still like the Dart and would recommend the Limited or any model without the sport suspension that the GT features. This one is just too stiff with the ride bordering on harsh. Racy R18-rated tires didn’t help either. The GT intends to be a boy-racer toy at a modest price and it comes close to that goal.

There’s strong power here with a 2.4-liter I4 Tigershark engine with MultiAir to increase fuel efficiency. It generates 184 horses and a torque rating of 171. So pound the gas pedal and the Dart GT responds.

In normal city driving there’s good power too, although some hesitation as you accelerate. Linked to a 6-speed manual, which is standard, you could likely have some fun with the GT. But the test car added an optional $1,250 6-speed Powertech automatic that tames the oomph factor, mostly. You’ll still hit highway speeds easily, but the car feels a bit heavy and the shifts are not as crisp or timely as they would be if the driver was handling those duties.

Still, the car looks sporty with trim lines and an attractive profile. I like the car’s nose and the full body-width LED taillight that reflects other Dodge model styling. Dart looks sharp. END_OF_DOCUMENT_TOKEN_TO_BE_REPLACED