Fun came in a different package at this auto show 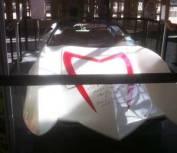 OK, I’ll admit it, the Chicago Auto Show blew me away. Lots of cars and especially lots of cool cars, some that were just ideas. The Chicago Auto Show is in McCormick Place and has one million square feet so they can pack a lot of cars in while Milwaukee’s is in the much smaller convention center. Not making the trip up to Milwaukee included Toyota’s Ft 1 concept car (left). But to make up for that, Milwaukee had cool cars you normally would not see like the K.I.T.T. movie car and a street-legal version of Speed Racer (far right) brought up from the Volo Auto Museum, just down the road from Milwaukee in Volo, IL.

Camp Jeep was even more fun than Chicago

I was wondering with a smaller building how Milwaukee was going to handle the space needed for Camp Jeep, and the answer is they set the track up outside on West Wells Street. Brrr it was cold but they had heaters everywhere and you got right into the Jeep. They had all the elements in Chicago but added two more and made it a blast. Come along and hear me laugh, along with my 15-year-old daughter Meg, who by the way asked go to the show. Great kid. Loves cars, airplanes, and golf.