W25 dominates die-cast like real racer did the track

Before WWII and before Formula 1 racing there was the European Championship with major European automakers like Alfa Romeo, Auto Union, Maserati, Bugatti and later Ferrari. But in 1934 Mercedes-Benz jumped into the fray with its W25 racer and by 1935, after a year of development, the W25 was dominant. 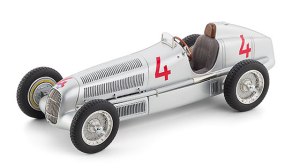 The silver racer’s inline 8-cylinder engine boasted up to a monstrous, for the time, 430 horsepower and the team featured three top drivers, Rudolf Caracciola, Manfred von  Brauchitsch and Luigi Fagioli. Caracciola would win six of the 11 races in 1935 and become European Champion. Fagioli won the lead-off Monaco Grand Prix and two others that season. END_OF_DOCUMENT_TOKEN_TO_BE_REPLACED