Two-seat muscle car a rarity, but ready to race

AMC’s AMX was an automotive rarity, a two-seat muscle car on a short wheelbase that most folks at the time agreed handled more like a sports car. 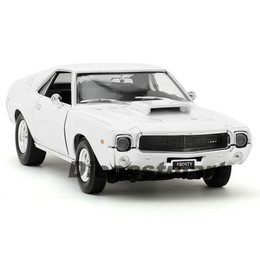 American Motors’ Javelin had just come out a few months earlier when AMC unveiled the AMX for 1968 ½ in February of that year. Auto World’s 1:18 version is a “frost” white 1969 AMX Hurst SS version, the rarest of the rare.

Only 52 AMX models were made, all starting out white as they rolled off the assembly line headed to Hurst Performance for tuning, the aim being drag racing. END_OF_DOCUMENT_TOKEN_TO_BE_REPLACED