Dodge has never been shy about jamming a big V8 into one of its cars and trucks. A great example is the Durango, I own a 2017, introduced to the public in 1998. Just two years later the 5.9 R/T arrived with 17-inch alloy wheels and a standard 5.9-liter V8. Other goodies included a standard limited-slip rear differential with a 3.92:1 final drive stiffer different shock absorbers, plus a sportier exhaust that gave it a nice grumble. Rounding out the package inside, the R/T got leather and suede-trimmed seats.

These are really cheap to pick up now, lots under $5,000. This one is considerably less because of all the rust. I spotted it in Monona, WI where my daughter works. A fun ride though. With the push for EV’s, I hope Dodge doesn’t forget its roots in muscle cars with big V8s but fear that’s the road they’re going down.

Be sure to check back next Friday for another one of my car spots along with some history.

My wife calls Toyota’s 4Runner a manly man’s truck, and it certainly is.

Tall, muscular looking, big tires and wheels, a hood scoop, a husky luggage rack on the roof and an engine that growls along with knobby tires that rumble on the road. Yes, manly and a serious off-roader, made even more so by being the TRD Pro edition. END_OF_DOCUMENT_TOKEN_TO_BE_REPLACED

How good are you at car spotting?

I grew up with a kid in my neighborhood who could tell you what kind of car had just driven by listening to the engine. Yup, he was good. I love doing this, especially when the new cars come out. But when I was driving during the evening rush here in Milwaukee I tried identifying cars by just their tail lights. Relax, we were stopped most of the time. I grabbed ten images of 2018-19 vehicles’ tail lights. See how good you are. To make it tougher, I photoshopped out any logos if they were in the shot. If you choose the wrong answer it will appear red while the right one turns green. Good Luck. BTW, using Google Image Search is cheating and participants will be flogged. Also, right-clicking on the image will not give you the correct answer. I couldn’t make it that easy.

END_OF_DOCUMENT_TOKEN_TO_BE_REPLACED

VW goes big into the SUV market with Atlas … 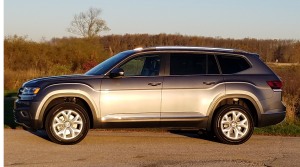 There are no awards for being late to the party, but VW is hoping sales are its consolation prize for finally creating a large SUV, the Atlas.

It won’t win any styling awards (can you say big and boxy?), but it’s certainly stout and a bargain!

While every major automaker, including the likes of Mercedes-Benz and Porsche, have created a large SUV, it took VW until late this summer to release its Atlas, a 2018 model that is very nearly the same dimensionally as the Dodge Durango I tested a couple weeks back. Both are a pleasure to drive.

What the Atlas has going for it is nimble handling, good acceleration and a ride to match, but it’s also modestly priced. How modest? 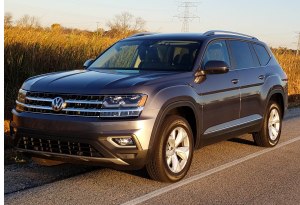 The base S model starts at $31,425 including delivery and touts a 2.0-liter turbocharged I4 that makes 235 horsepower. That’s with front-wheel drive, naturally, but even the tested SEL model with V6 and 4Motion (AWD) was just $42,690. No options were added either and with a $925 delivery fee the dark Platinum Gray Metallic test ute went for $43,615.

While that still won’t fit into everyone’s household budget, compare that with the tested Durango’s $49,360 price tag. In fact, most large utes roll out of the showroom at roughly $50 grand. Chief competitors are the Honda Pilot, Chevy Tahoe, Ford Explorer, Nissan Pathfinder and Toyota Highlander. END_OF_DOCUMENT_TOKEN_TO_BE_REPLACED

For those of you who have not read my posts before, I love Jeeps! My love affair began in 1970 when American Motors purchased The Jeep Corporation from Kaiser Industries. My dad worked for AMC at the time at its National Parts Distribution Center in Milwaukee, WI. so now I would receive employee pricing on Jeeps. Dad was the first family member to hop on when he purchased a Cherokee Wagoneer in 1988 exactly like the one in the picture. This wasn’t the larger SJ version but the XJ built on the new Cherokee platform introed by AMC in 1984 and over its 17-year run, just under three million were sold. This was ground-breaking stuff at the time essentially kicking off the SUV segment. Later on, mom wanted something easier to get in and out of and he sold this Jeep to me. That started a relationship that would last a very long time. END_OF_DOCUMENT_TOKEN_TO_BE_REPLACED