Every once in a while a new shape surprises the racing world. In the late 1950s and early ‘60s it was the rear-engined F1 racer that eventually took the Indianapolis 500 by storm. In the 1970s it was the 6-wheeled Tyrrell F1 racer. Today it’s the DeltaWing.

This shiny silver racer features a triangular shape with two wheels close together in its needle-like nose and a wider rear-end complete with a vertical wing, so a delta wing shape. Spark Models now brings the shape to an eye-catching 1:43 diecast model that will stand out in any racecar collection.

DeltaWing, the racer, started on the drawing board of designer Ben Bowlby back in 2009 and originally was a proposed chassis for IndyCar, which was looking to revamp its racecar package. While it didn’t fly among the upper brass there, likely because it wasn’t a fully open-wheeled racer, it did gain support in the racing world.

Ostensibly the DeltaWing’s design is aimed at cutting drag so it is faster in a straight line and also more fuel efficient, plus reducing weight for better fuel economy. Its nose is thin with the front wheels creating just a 2-foot wide track, while the rear tires’ track is about 5 ½-feet wide. You’d think the car would be unsteady, but it’s not and turns crisply into turns. 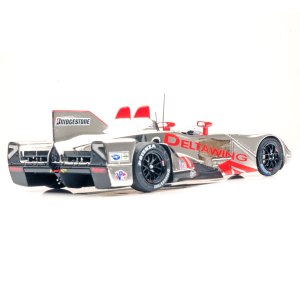 Major IndyCar team owner Chip Ganassi funded the DeltaWing project and Dan Gurney’s noted All-American Racers built it to be entered as an experimental racer at the 24 Hours of LeMans in 2012. Nissan provided the engine, originally a 1.6-liter turbo I4. At LeMans it qualified 29th out of 50+ cars and was running well before being involved in an accident with another racer. END_OF_DOCUMENT_TOKEN_TO_BE_REPLACED