In post-war U.S. open wheel racing the Blue Crown Spark Plug Specials were as dominant as the New York Yankees were in baseball for years. The Blue Crowns’ reign was shorter, but everyone knew their name, like Ruth, Guhrig or Dimaggio.

Replicarz recognizes that and ups its assault on historic Indianapolis 500 race winning cars with 1/18 scale models of the Blue Crowns, a nice complement to the beautiful 1/43 scale models it released last year.

As a refresher on the Blue Crowns’ history, consider that Lou Moore had been a successful Indy Car driver in the late 1920s and ‘30s, finishing second in the Memorial Day classic in 1928. His cars won Indy twice prior to World War II and during the war he hooked up with Leo Goosen to create front-drive cars with 270-horse Offenhauser engines that he was convinced would rule Indy. He was right. 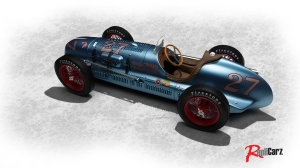 They dominated the 1947, ’48 and ’49 races with Mauri Rose winning the first two years with teammate Bill Holland second, and in 1949 Holland turned the tables on Rose, a 3-time winner. Oh, and a third team car with George Connor driving finished third in 1949. Even today’s Roger Penske would be proud. END_OF_DOCUMENT_TOKEN_TO_BE_REPLACED