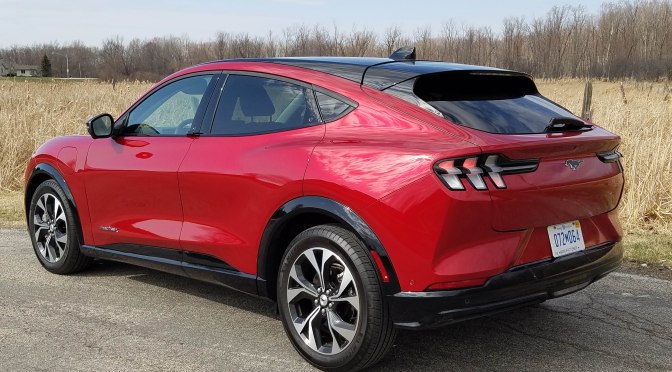 Electric Mustang Mach-E a fine crossover, not a Mustang …

Marketing is an interesting and amusing craft and Ford’s marketers realize they really only have two ways to attract attention to their brand.

First is the F-150, the longtime best-selling vehicle in the U.S., and second is Mustang, its iconic muscle car that has been garnering admiration since 1965.

So, when Ford was about to launch its first full-electric crossover it needed a way to get reluctant potential buyers to at least consider the crossover. Calling it an Edge, Focus, or Probe, just wouldn’t give it the panache and garner the attention it deserved. Calling anything that’s not a pickup an F-150 could damage its top money maker.

So the Mustang Mach-E was born.

Essentially Mach-E is a fine mid-size crossover with a refined interior, massive 15.5-inch info screen replacing virtually all buttons and knobs, and enough seating and cargo room for a family of four, or five. If you’re in the market for a crossover, this deserves a look.

Ford designers worked hard to put a nose and tail on the Mach-E to give it a family resemblance to Mustang, think first cousin on you mom’s side, but with more girth. The three-bar taillights and the large Mustang pony logo on the nose and tail more than hint that this has Mustang DNA.

But the Mach-E is not a muscle car, but not due to a lack of power. No that feedbag is overflowing. The Mach-E is heavy and handles like a big SUV or crossover. There’s no throwing it into corners for precise apex clipping and hustling it out the other side like you’re Lewis Hamilton. Mach-E feels heavy and pushes into corners.

Likewise ride feels more like that of a big SUV than a sporty, nimble pony car. The shocks seem to dampen the major jolts, but you feel the road more here than in most crossovers and cars of any sort. It’s a firm ride that the family may not appreciate in town. Highways, which tend to be smoother, are fine and expansion joints don’t upset the ride.

Yet two things DO stand out.

First, the Mach-E is distinctive in its styling so you know it’s not a jelly bean Tesla Y or more traditional looking Jaguar I-PACE. Second, and to the Mustang point, it’s a rocket sled on wheels.

The tested Rapid Red ($400 extra) model was the Mach-E Premium AWD with an 88 kWh extended range battery, a $5,000 add-on that many folks will want for its potential range. In rear-drive mode Ford rates its range at 300 miles, with AWD that falls to 270 miles. A full charge on the test model was right about 260 miles.

The electric motors in this Premium model create 346 horsepower and will boost this 4,394-lb. crossover to 60 mph in 4.8 seconds. Quick!

Torque is amazing and instant in Unbridled mode, what probably would be called Sport or Sport+ in a non-pony branded crossover. Mach-e has three modes accessed via the Mustang icon atop the giant info screen. Whisper is for normal driving, Engage is a happy medium between Whisper and Unbridled. Acceleration is quick in all, but definitely upgraded in Engage and crazy fast in Unbridled. My wife was wowed, and she rarely comments on my test vehicles.

Unbridled also firms the steering to add a more muscular feel, but like a Sport mode on a gas-powered car, you use more energy more quickly in Unbridled, so likely won’t want to just cruise the neighborhood in this performance mode.

Note too there’s a Propulsion Sound toggle on the screen that adds some fake engine noise to the acceleration, most noticeable in Unbridled so that you viscerally feel like there’s more power, at least in your ears. Another toggle lets you shift between one-pedal control, meaning the accelerator either allows the Mach-E to coast like a gas-powered car once you release it, or there’s the natural electric motor and regenerative braking pull that slows the vehicle more quickly. Think of a golf cart once you release the accelerator, or a slot car that slows nearly immediately after the juice is off.

I liked the feel and got used to it quickly, soon mastering the let-up as I approached a stop sign so the Mach-E would glide to a full stop just at the sign. This later setting allows the batteries under the rear seat and cargo area to recharge partially as the vehicle slows, thereby extending range.

Driving became its own entertainment with the various modes, plus watching the small speedometer/range meter just above the steering column. Often the mileage range shrinks rather quickly compared with the percentage battery charge that remains.

Inside, the Mach-E goes all digital with that giant vertical screen that seems overwhelming at first, but you get used to it. Seeing a navigation map that large is particularly comforting, as is the 360-degree camera when you back up. Yes, there’s a beep as you back up to let folks know the quiet electric vehicle is coming.

Using the screen is pretty easy and finding radio stations, saving favorites, and turning up or down the climate control system where you slide a bar up or down with your finger. Likewise there’s heated seats and a heated wheel here. Everything, as mentioned before, is handled through the screen. Mine never jammed up, as some brands have in past vehicle tests.

The dash was a combo of black leather and tweed cloth, so very sophisticated looking while seats were black leather with gray stitching. A textured graphite gray insert spiffed up the dash face and a small amount of gloss black trimmed the console, which is mainly a dual-level storage tray and container. Gear shifts are handled via a round knob on the console and a wireless phone charger lies at the front of the cargo tray.

Overhead is a solid panoramic sunroof that does not open, nor is there any sun shade. But it is seriously tinted to avoid overheating in the summer sun. While I appreciate the big sunroof I’d rather see a smaller one along with a solar panel up top, akin to the Hyundai Sonata roof that helps charge that hybrid’s batteries.

Seats are mildly contoured but comfy and easy to slide in and out of, with front seats powered and the driver getting a power lumbar support. Three memory setting buttons are on the door panel.

Mach-E’s rear seat is roomy enough for three, but particularly comfy for two adults. The power hatch in back reveals a large cargo area, although the cargo floor is higher than many due to the batteries beneath. There is, however, a storage bin there for the mobile charging system that you plug in to replenish the batteries. And there’s a frunk, a front trunk that holds another 4.7 cu.ft. of goodies.

No surprise among the safety features. They’re all here thanks to Ford’s Co-Pilot 360 system with blind-spot warning and cross-traffic alert, lane-keeping assist, adaptive cruise control, reverse brake assist, evasive steering, pre-collision assist with emergency braking and more. There’s also that 360-degree camera system which helps because visibility is a bit limited with big A-, B-, and C-pillars.

Know too that Ford offers several Mustang Mach-E models now with an even racier GT model coming soon. The base Select trim starts at $43,995, including delivery. It has a lower powered battery and creates 260 horsepower while being rear-wheel drive. Its range is 230 miles and the AWD version’s range is just 211 miles.

The tested Premium starts at $50,800 and as driven was $56,200 with the extended range battery being the big cost option. Range is rated 300 miles for RWD models and 270 for AWD. My experience was more along the 260-mile range with AWD. Ford says the test model beats Tesla’s Model Y in range. I’ve not tested a Tesla.

With a 50% charge I left the Mach-E plugged into my 120-volt outlet for 24 to 26 hours and got it to 100%. Be aware that more and more car dealers, stores, hotels and such are installing fast chargers that you can tap into for a charge (electric and monetary). I’d recommend the PlugShare app for your phone to alert you to spots to recharge, if on a trip. There are other such apps too. Note that sometime the charging station listed is not available when you arrive, or is out of order, as was one at a chain gas station near my house.

The Mustang Mach-E is a speedy crossover with good range and a comfortable and functional interior. This represents what most electric vehicles will be like eventually from the surviving automakers. Marketers name dropping aside, at least this one has some style.

Misses: No sun shade, stiff ride, big A- B- and C-pillars limit view, could use a solar roof panel to boost battery charge. 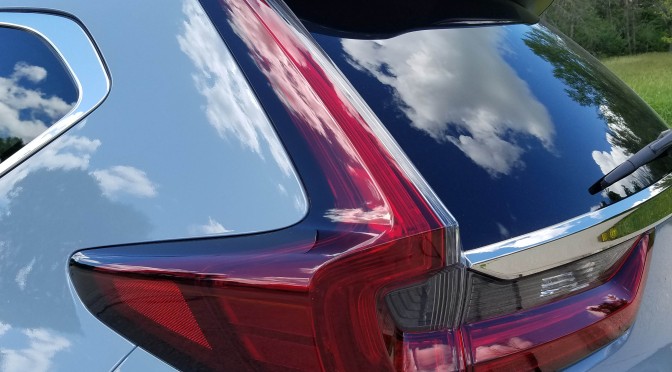 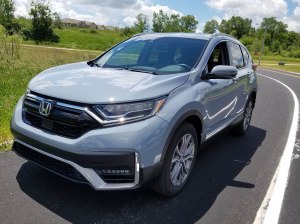 A few years back I declared hybrids the way to go until all-electrics gained more range and the infrastructure to remotely recharge electrics grew substantially. Nothing has changed my mind and if anything the growth of quality hybrids makes my point all the stronger.

This week’s drive proves that point in electrons!

Only a few months back I tested Honda’s popular small SUV, the CR-V. It’s a top-seller and pretty much leads a closely contested market segment. I feel the hybrid version of its top-level Touring model should be its top-selling model.