OK, stick with me here 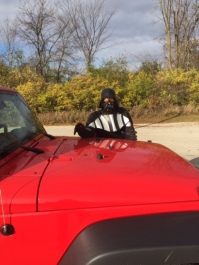 Today is Halloween and decided to wear my Darth Vader costume. I came up with the idea of this wacky post while I was driving into work this morning, wearing the costume. Wish I could have used the forces of the Dark Side to get the pokey drivers going. Yes, I got looks, lots of them, and smiles.

I’ve seen all the Star Wars movies and thinking back did not remember seeing any scenes where Vader drove a vehicle. Probably because that was so last year by then. I do remember him flying a TIE Advanced x1 fighter in the first move when the Rebels were attacking the Death Star. Luke Skywalker was leading the attack and the only one who had a shot at him was Vader. His personal ride was Super Star Destroyer Executor, the premier command ship of the Imperial Navy, and the first of the Executor-class Star Dreadnought line. OK, am I getting way to geeky on this. Yes, I am a Star Wars fan. Saw the first movie Star Wars Episode IV: A New Hope which came out in 1977 14 times. I know, it’s a sickness now spread to my daughter.

Enough of the Star Wars all ready