Tough Toyota 4Runner is anything but a TRD  …

Let’s face it, you’d better have a pretty strong, competent vehicle if you’re going to give one of its models the TRD moniker.

We all know what that sounds like, but in Toyota’s case it means Toyota tough, as in Toyota Racing Development. And that’s why the new 4Runner proudly touts TRD in its name and on its haunches.

The test truck was the mid-level TRD Off-Road Premium edition with four-wheel drive and a sparkling Barcelona Red Metallic paint job. It also features a tough-looking exterior with distinctive nose and a hood air scoop that not all models have, not to mention few of its competitors. 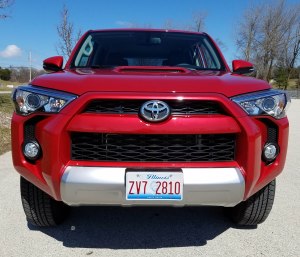 4Runner is a big ute, rolling on a 109.8-inch wheelbase it’s a sizeable 191.3 inches long and weighs a hefty 4,750 lbs. So move over mid-size crossovers and SUV pretenders, 4Runner is ready to go rock-climbing, and the TRD version thumbs its nose at rough terrain. END_OF_DOCUMENT_TOKEN_TO_BE_REPLACED