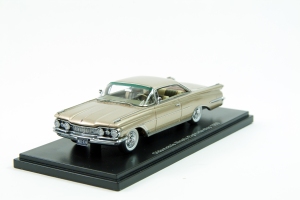 Cars used to be boats, as in they were so long that some folks called them land yachts.

Case in point, the 1959 Oldsmobile Ninety-Eight Hardtop … size, etc. and riding on a monster 126.3-inch wheelbase. That’s just a bit shy of today’s Chevrolet Suburban. No wonder the 5 kids fit so well in the back seat and the trunk carried luggage for a family of seven or eight.

NEO recreates the lengthy Ninety-Eight in all its chrome-trimmed glory in 1/43 scale and for a modest price, considering the inflation in small collector car prices the last couple years. 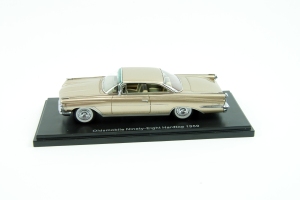 The Ninety-Eight was Oldsmobile’s largest, and finest car, sharing its looks with the next model down, the Eighty Eight. Olds had four models in its Ninety Eight line-up, but the hardtop (meaning no B-pillar) was the looker of the bunch. All were related to other top GM models, the Cadillac Eldorado, Sixty Special, Deville and Series 62, plus Buick’s big boy, the Electra.