Restorations take a lot of time and cash …

.. I’m short of both right now. Getting a forgotten car back on the road is one thing but getting it back on the track it another. Watch this video where the iconic 1966 Le Mans-winning P/1046 GT40 shared by Bruce McLaren and Chris Amon returned to the track at Lime Rock Park. It took almost two years to make this happen. Enjoy.

Ford’s GT40 is the most beautiful enclosed race car ever made, and one of the most successful too. That’s my design bias, but the GT40’s success can’t be argued.

Funny thing, it was created to settle a score at the highest levels of the automotive world. In the early 1960s Henry Ford II was rebuked in efforts to buy Ferrari and declared war on the Italian sports car maker and race team. The GT40, originally with a Lola chassis and various Ford V8 engines, was his weapon. By 1964 the first GT40 was raced at the Nurburgring 1000km endurance race and then the 24 Hours of LeMans, where three were entered and one led. All failed to finish. Yet ultimately the GT40 would win four straight LeMans 24-hour endurance races from 1966 through 1969, a remarkable run that ended Ferrari’s reign as the LeMans champ. Ferarri has not won LeMans since.With the annual endurance race being run in late June, this is a good time to look at what the diecast world offers regarding the only successful U.S. manufacturer’s race efforts. END_OF_DOCUMENT_TOKEN_TO_BE_REPLACED 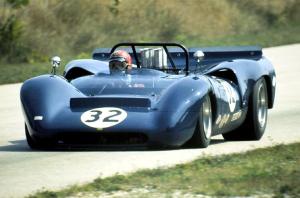 Lola racing cars continue to be some of the most successful racers in the world, but in the 1960s and ’70s Lola chassis were popping up in every series – and winning!

Noted Ford GT and Formula 1 car designer Eric Broadley was instrumental in the Lola T-70 sports car design. This was a semi-monocoque racer made of light steel and alloys with a Fiberglas and reinforced plaster body featuring the soft sweeping curves that made racers of that era so visually exciting. END_OF_DOCUMENT_TOKEN_TO_BE_REPLACED