Those in the know of BMW lingo realize adding an M to any BMW nameplate means two things, more performance, and naturally, more money. 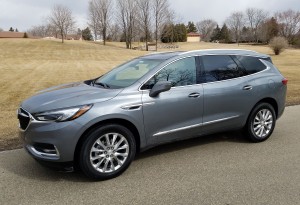 There’s no foolin’ around here, the Buick Enclave has been remade for 2018 and it’s among the best luxury crossovers/sport-utes out there. It was good before. It’s better now.

First, it’s restyled so it looks more sleek and modern outside. But the wheelbase has been stretched to 120.9 inches, up 2 from the previous model that debuted 10 years ago. That stretch creates a roomy interior and creates 10 cubic feet of additional cargo space. END_OF_DOCUMENT_TOKEN_TO_BE_REPLACED

If you’ve always dreamed of being an airline pilot, but never got the training, you should try landing the new Lexus LX 570.

Lexus has created a cockpit fit for a pilot wanna-be with buttons galore. About the only thing missing is an altimeter.

Here’s a quick count of what you’ll get for nearly $100 grand. The center stack has 15 buttons plus four temperature control buttons, and two knobs for the radio. The console features 11 buttons, two toggles, and two knobs, plus a small park brake lever.

Need more? Oh there’s more. The power adjusted tilt/telescope steering wheel’s hub has 10 buttons, plus a 4-way directional pad and there’s a cruise control stalk behind the wheel. There are another 8 buttons on the dash’s face, plus the start button. Ironically the foot-wide screen atop the dash is not a touchscreen, but controlled by Lexus’s awkward and touchy mouse pad on the console.

If ever there were an argument for an autonomous car, this would be the starting point.

Once you’ve mastered the maze of buttons, toggles and screen controls you’ll find the LX570 is the luxury version of Toyota’s Land Cruiser, a big beast of an SUV with serious off-roading capability. It has a wheelbase of 112.2 inches and is a full 199.4 inches long. The Lexus weighs in at a stout 6,000 lbs., but will tow 7,000. END_OF_DOCUMENT_TOKEN_TO_BE_REPLACED